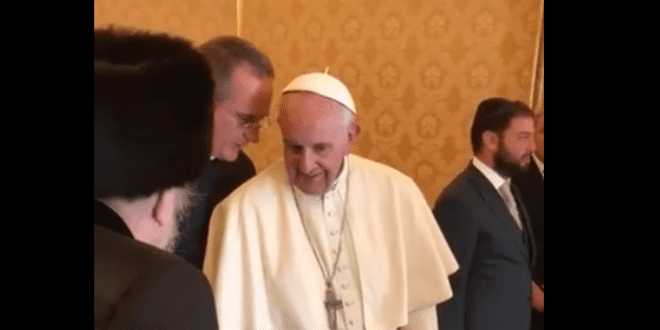 An improbable video showing Pope Francis dancing to a Hebrew song sung to him by Orthodox Jews is making the rounds on the internet and raising some questions. The song was composed by Rabbi Shlomo Carlebach, famous for being a singer/songwriter as well as a spiritual leader, whose hidden connection to the Vatican is much stronger than most people realize.

On Monday, a group of Jewish representatives led by Rabbi Edgar Gluck, Chief Rabbi of Galicia, paid a visit to the Vatican to express their concern about rising anti-Semitism in Europe and the destruction of Jewish cemeteries. The rabbi’s son, Zvi Gluck, director of an organization dedicated to helping Jewish victims of abuse and addiction, discussed his organization’s mission with Pope Francis, who responded by repeating “zero tolerance” several times.

At the end of the delegation’s 45-minute private meeting with Pope Francis, two young men, members of a Jewish band called Pompadita, surprised the pontiff by pulling out guitars and singing a verse in Hebrew from Psalms set to music.

With long life will I satisfy him, and make him to behold My salvation.’ Psalms 91:16

The pope was emotionally touched by the song, swaying to the music as the gathered Jews danced and sang.

The composer, Rabbi Shlomo Carlebach, was well known as a charismatic spiritual leader. What may not be known is the strong, though somewhat hidden, connection to the vatican.

In 1995, Pope John Paul II performed a mass in New Jersey’s Giants’ Stadium. Though few of the 85,000 Catholics in attendance knew it at the time, the music that was played at the beginning of the occasion was “Because of My Brothers and Friends”, a tune composed by Rabbi Carlebach and based, as many of his songs were, on Psalms.

For my brethren and companions’ sakes, I will now say: ‘Peace be within thee.’ Psalms 122:8

The event came one year after Rabbi Carlebach passed away, but his musical connection to the papacy goes deeper. In an interview two years ago, Neshama, the rabbi’s musician daughter, stated that, according to her father, Pope Benedict listened to Carlebach music and even used some of the tunes in the public services in the Vatican.

Neshama also revealed that the musical rabbi’s connection to the Vatican was almost up-close and personal. After her father passed away, she found an invitation among his papers to travel to Rome and sing for Pope John Paul.