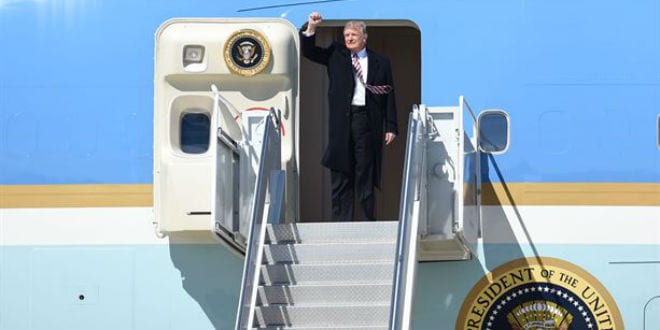 The itinerary for President Donald Trump’s whirlwind trip to Israel, scheduled for May 22, has been released to the public, revealing that the president plans to visit two major religious and historical sites of the Jewish people during his short 26-hour sojourn.

Trump, who will be traveling with his wife, Melania, his daughter Ivanka, and his son-in-law Jared Kushner, will apparently head straight from Ben Gurion Airport to the Old City of Jerusalem, where the family will visit the Western Wall. Also known as the Kotel, the only remaining wall of the Holy Temple compound is a popular and inspiring spot for world leaders visiting the Holy Land.

After lunch at the King David hotel, where US presidents traditionally stay in Israel, the Trump entourage will meet President Reuven Rivlin at the President’s Residence in Jerusalem. The itinerary then lists a “possible visit” to Yad Vashem, Israel’s official Holocaust memorial. Israeli site Ynet News reported some friction between the American and Israeli governments over this visit, with the Trump delegation willing to allocate only a half-hour to the museum and the Israeli side insisting on an hour-and-a-half visit, leaving the question unresolved.

Trump will close the day with Prime Minister Benjamin Netanyahu, who will join him for dinner at the President’s Residence. The two last met in Washington at the White House in February.

After spending the night at the King David – the hotel will be emptied of all guests before Trump’s visit – the presidential delegation will travel the next morning from Jerusalem to Masada, the ancient Jewish fortress, perched on a desolate desert mountaintop, where hundreds of Jewish rebels committed mass suicide to defy the conquering Roman army in 73 CE.

It is not known whether Trump will ascend to the top of the plateau in a cable car or remain at the base of the mountain, but it is at the ancient fortification that the president plans to give his main address while in Israel. According to various media reports, Trump has had a fascination with Masada for years, proposing it as the location for the 2011 Miss Universe Pageant, which he owned until 2015.

From Masada, Trump will travel back towards Jerusalem to meet with Palestinian Authority President Mahmoud Abbas in Bethlehem. Trump hosted the Palestinian leader at the White House earlier in the month, when the two discussed the revival of a possible peace plan. The president will then return to Ben Gurion Airport and depart to his next stop, the Vatican in Rome.