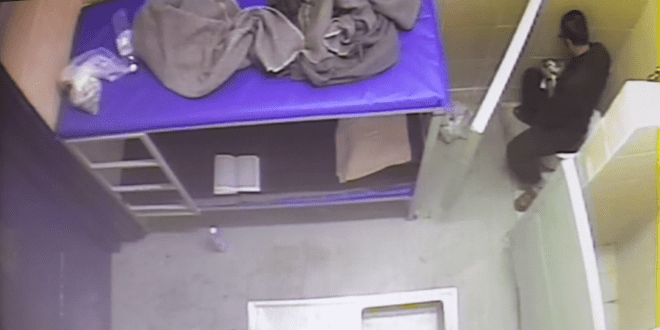 Three weeks after Palestinian security prisoners began a hunger strike led by Marwan Barghouti to obtain better conditions, security cameras caught Barghouti red-handed in the middle of a meal in his cell. The Israel Prison Service (IPS) released a video showing Barghouti putting food into his mouth that he had hid in his cell several days prior.

“As I said from the very beginning, this hunger strike was never about the conditions of the convicted terrorists, which meet international standards. It is about promoting Marwan Barghouti’s political ambitions to replace Abu Mazen,” said Public Security Minister Gilad Erdan during a press conference following the release of the video.

Erdan added that “Barghouti is a murderer and a hypocrite who urged his fellow prisoners to strike and suffer while he ate behind their back. Just like he lied to the world when he wrote in the New York Times about ill treatment, he lied to the Palestinian public when he claimed to be on a hunger strike.”

“Israel will not give in to extortion and pressure from terrorists,” asserted Erdan.

This is the second time the Fatah leader has been caught breaking a hunger strike. In 2004, the IPS published pictures of Barghouti eating in his cell as well. Fatah officials had accused the IPS of using old photographs to tarnish Barghouti’s reputation.

Deputy Defense Minister Eli Ben Dahan called Barghouti “a shameless terrorist pretending to be a nationalist idealist, a leader who sent others to blow themselves up among Israeli civilians while he remained safe and is now leading a hunger strike.”

IPS Prisoners’ Division Director Asher Vaknin announced that a decision was made to significantly extend the duration of the sanctions imposed on the prisoners and to keep them in force for several months after the strike. “The decision was made to increase the fines imposed on the prisoners on hunger-strike to more than NIS 1,500,” said Vaknin. “More than 350 strikers have been transferred to other wards or prisons.”

In cooperation with the IDF and the Health Ministry, three clinics have been opened in order to treat those who will need hospitalization. Minister Erdan explained that Health Ministry guidelines stipulate that prisoners need not be taken to the hospital in such a situation since the clinics would attend to their needs. Erdan added that the prime minister instructed the Health Ministry to examine all the implications of the proposal to bring doctors from abroad to forcibly feed prisoners on hunger strike who reach a point where their lives are in danger.

The video and ensuing statements were released shortly after the EU Heads of Mission in Jerusalem and Ramallah had demanded that Israel fully respect “international humanitarian law and human rights obligations towards all prisoners,” who are legally considered “protected persons” under Article 76 of the Fourth Geneva Convention.