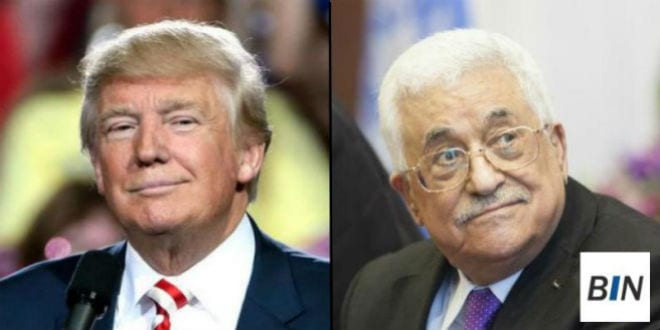 PA President Mahmoud Abbas’s foreign affairs adviser Nabil Shaath on Thursday told Israel Radio, “It’s absurd to request that we stop paying the families of prisoners. That would be like asking Israel to stop paying its soldiers.”

White House Press Secretary Sean Spicer said at a press conference on Wednesday that the issue was discussed at the meeting between Abbas and Trump.

“The president raised concerns about the payments to Palestinian prisoners in Israeli jails who have committed acts of terror and to their families,” Spicer said. “He emphasized the need to resolve this issue.”

After their meeting, President Trump and President Abbas held a joint press conference, at which the US president said, “there cannot be lasting peace unless the Palestinian leaders speak in a unified voice against incitement to violence and hate.”

This comes in marked contrast to the previous administration of President Barack Obama, who stated on several occasions that the main obstacles to an Israeli-Palestinian peace agreement wee the Jews living in Judea and Samaria.

President Abbas said to reporters, “we are raising our youth, our children, our grandchildren on a culture of peace.”

“I heard President Abbas yesterday say that the Palestinians teach their children peace. Unfortunately, that’s not true. They name their schools after mass murderers of Israelis and they pay terrorists,” Netanyahu said in response to Abbas’s comments, at the opening of a meeting with the Romanian prime minister in Jerusalem. “But I hope that it’s possible to achieve a change and to pursue a genuine peace. This is something Israel is always ready for. I’m always ready for genuine peace.”

Prime Minister Netanyahu has said that PA payments to terrorists is a major obstacle to a peace agreement, but it seems unlikely the Palestinians will change this policy. On Wednesday,  Ahmad Majdalan, a senior PLO official said in an interview on Israel Radio that in May 2014, Israeli negotiator Yitzchak Molcho, chief Palestinian negotiator Saeb Erekat and US secretary of state John Kerry signed a document allowing the Palestinians to pay terrorists.

The Prime Minister’s Office released a statement on Wednesday, saying Majdalan’s claim was “another Palestinian invention, which never happened, which was intended to distract from the discussion of the demand to stop the Palestinian Authority funding terrorists.”

The Senate expressed clear support for the president, which passed a $1.1 trillion funding bill which included a provision that reduces aid to the Palestinians Authority in an equal amount to the money they pay to terrorists. In addition, leading Republican Senators wrote a letter to President Trump on Tuesday asking he support the Taylor Force Act, a bill which would cut US funding to the PA if they continue funding terrorism. The bill was named for a US citizen and veteran killed by a Palestinian terrorist in 2016 in Tel Aviv.

Israeli President Benjamin Netanyahu was not impressed by Abbas speech in Washington, stopping just short of calling his Palestinian counterpart a liar.

Despite the cordial appearance at Trump’s joint White House press conference with Abbas, there may be turbulence beneath the surface. On Thursday, Trump posted a video of their meeting on Twitter, saying, ““An honor to host President Mahmoud Abbas at the WH today. Hopefully something terrific could come out of it between the Palestinians & Israel.”