WATCH: The Amazing Pro-Israel Palestinian Video and the More Amazing Story Behind It

Home » WATCH: The Amazing Pro-Israel Palestinian Video and the More Amazing Story Behind It 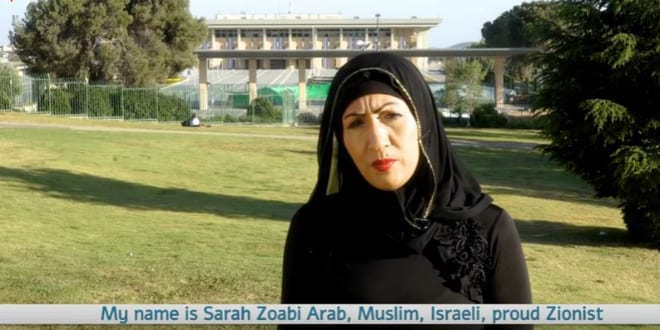 The most inspiring Israel Independence Day video this year was the most unexpected, showing a Muslim Palestinian woman passionately describing her love for the State of Israel in Arabic. As powerful as the video is, the story behind it is even more so.

The video was posted on Monday by Boomerang, a non-profit organization working towards improving Israel’s image via social media and YouTube videos, and in a few short days has garnered almost one million views. In the video, Sara Zoabi, an Israeli Arab, stood proudly in front of the Knesset Building, expressing her love for Israel in no uncertain terms. The video stands as an open challenge to the way Israel-haters view the plight of Palestinians in Israel.

Zoabi unabashedly declares in the beginning of the video, “I believe with my whole heart in the right of the Jewish People to a sovereign state in the holy Land of Israel. It is a right that God promised.”

She goes on to enthusiastically praise Israel and the Jewish People, waxing poetic.

“The sun shining over you and the wind blowing through your fields, they are the inspiration for my love for you,” she said in her native Arabic. She decries Arab terrorism and praises Israeli humanitarian efforts.

“I pray that Allah (God) will protect us and the People of Israel,” she said.

Unfortunately, such devotion to their country comes at a high price for Israeli Arabs. Ezri Tubi, the founder of Boomerang, said that since the video came out, Zoabi, has received dozens of death threats.

“She is a very strong woman but when I called her the next morning, she was crying,” Tubi told Breaking Israel News.

Zoabi’s passion for Israel includes a love for her people. She approached Tubi about making a video because she felt a strong Israel was the only hope for the Syrians.

“Admittedly, the majority of Israeli Arabs do not feel the way Sara does, but many do,” Tubi said. “Few are willing to come out and express this, and I felt it was important to make a video showing this.”

The collaboration between Zoabi, an Arab, and Tubi,  powerfully right-wing and a settler from Yitzhar in Samaria, may seem odd, but for Tubi, that was part of the message. The video was also intended to present a side of the settler movement rarely seen in mainstream media. As a representative of the Jewish settlements in Judea and Samaria, Tubi has produced videos with several Arabs and Druze.

“There is a false perception that the right-wing hates the Arabs,” Tubi said. “For settlers, it is natural to collaborate with Arabs. This video shows that point graphically. That is also why we chose to do the video in Arabic.”

Her emotions are real and come from a story that is quite complicated.  Zoabi has been advocating for Israel for several years. Two years ago, she appeared on a cooking show. While creating a culinary gem, she told the judges, “I want to say to all the Arab [citizens] of Israel to wake up. Compared to other countries, to Arab countries – we live in paradise.”

Zoabi spoke before the Knesset in 2015, but her most vocal detractor came from a source close to home. Haneen Zoabi, a pro-Hamas Palestinian MK who has called IDF soldiers “murderers”, is Sara’s cousin.

Sara’s son, on the other hand, was more than supportive, producing his own pro-Israel videos. When three Israeli teens were kidnapped in 2015, Mohammad Zoabi, 17 years old at the time, posted a YouTube video expressing solidarity with Israel while warning the terrorists to return the Jewish youths unharmed.

The three boys were murdered, sparking the war in Gaza. Mohammad was threatened and forced to go into hiding as a result of his video.

Boomerang continues to produce pro-Israel videos at a remarkable pace, fighting for Israel’s legitimacy with a unique, non-apologetic approach. Tubi collaborates with many, but for the most part, it is a one-man effort. Nonetheless, it is enormously effective with his videos averaging half a million views.