Trump, Abbas Meet in Washington: “We Will Get This Done”

Home » Trump, Abbas Meet in Washington: “We Will Get This Done” 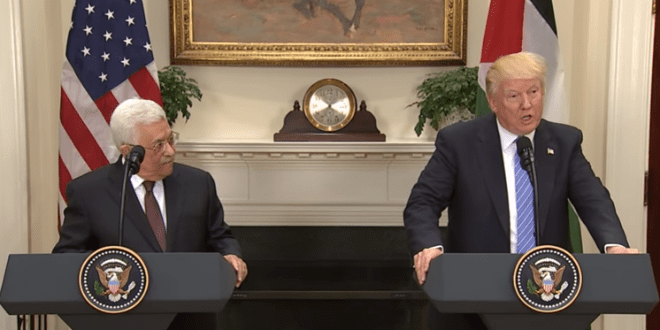 Palestinian President Mahmoud Abbas met on Wednesday with US President Donald Trump at the White House for the first time. In their preliminary statements, Trump declared that he is committed to working with Israel and the Palestinians to reach an agreement and claimed that no accord can be imposed by a third party.

“The Palestinians and the Israelis must work to reach an agreement that will allow both people to live, worship, thrive, and prosper in peace,” said President Trump. “I would like to be a mediator or a facilitator to anything they wish to do and we will will get this done.”

President Abbas reiterated the Palestinian position supporting the two-state solution on the basis of the 1967 borders with eastern Jerusalem as its capital. He asserted that a comprehensive peace agreement would give impetus to both the Arab Peace Initiative and the fight against the Islamic State.

“We are the only remaining people still living under occupation,” insisted President Abbas. “We aspire to attain our dignity and right to self-determination and we also want Israel to recognize the Palestinian state just as the Palestinians recognize the State of Israel.”

President Trump, however, made no mention of the term “two states,” which remains consistent with the statements he made during Prime Minister Benjamin Netanyahu’s visit to Washington mid-February. Furthermore, Trump praised Abbas for signing the 1993 Oslo Accords and said he hoped Abbas would be the one to sign the “final and most important peace agreement.”

“Trump offers a small but important overture to negotiations between Israel and the Palestinians,” said Zionist Union MK Nachman Shai, the chairman of the Knesset Lobby for US-Israel Relations. “He operates carefully but with determination and consistency. Israel must immediately respond positively and stand with the US president in this initiative.”

Shai added that Israel should not allow itself to be portrayed as it has been in the past, as refusing peace and automatically answering no.

Prime Minister Benjamin Netanyahu called President Abbas’s commitment to peace into question two days ago by criticizing the stipends being granted to families of Palestinians incarcerated in Israeli jails or killed for perpetrating terror attacks. He argued that Abbas was effectively funding terrorism and that Israel would only be ready to return to the negotiating table when those stipends would end.

The US is expected to bring up the issue of the stipends at the bilateral talks with Abbas though the Palestinian president might be hard-pressed to respond considering the current hunger strike by Palestinian security prisoners, an issue weighing heavily in the Palestinian political arena.