What Do Trump’s First 100 Days Mean for Israel?

Home » What Do Trump’s First 100 Days Mean for Israel? 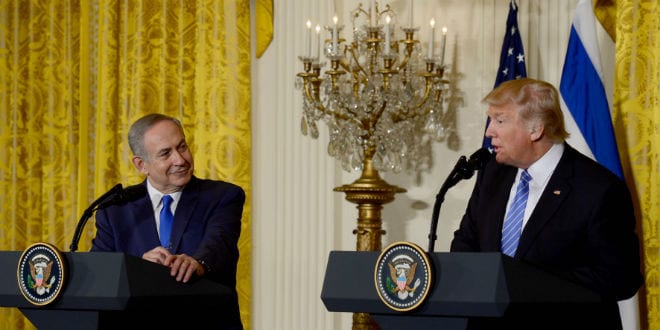 With the completion of President Donald Trump’s first 100 days in office, a time period often seen as formative for new presidents, the media is taking a close look at what the unconventional leader has accomplished, the tone he has set for his next four years, and the campaign promises he has kept or neglected.

How has Trump’s record on Israel in his first 100 days measured up? Breaking Israel News took a look at the biggest Israel-related stories which have come from the White House since Trump’s inauguration.

January 22 – On Trump’s second day in office, reports emerge from the White House that the administration has already begun discussions on the question of moving the American embassy from Tel Aviv to Jerusalem, which Trump had promised he would do while campaigning. The embassy was a major issue for Israel supporters, who were excited to see movement on the question so soon after Trump’s inauguration.

January 26 – Trump signs an executive order which would halt all funding to United Nations agencies which recognize the Palestinian Authority as a full member.

February 12 – Sending a mixed message to many right-wingers in Israel who hoped the Trump era would lead to a building spurt in Judea and Samaria, Trump tells Israeli press that he believes settlements “don’t help the peace process”. Five days later, during his first press conference with Israeli Prime Minister Benjamin Netanyahu, he reinforces the message, telling Netanyahu, “I’d like to see you hold back on settlements for a little bit.”

February 15 – During their press conference, Trump becomes the first president in US history to introduce the possibility of a “one state solution”. Despite Trump’s request about settlements, the first official state meeting of the two leaders demonstrates the beginning of a “new era” in US-Israel relations, marked by warmth, honesty and transparency after the cooler attitudes of former President Barack Obama took relations between the countries to a low ebb.

February 26 – The Trump administration says it is considering leaving the United Nations Human Rights Council (UNHRC) in protest of its blatant anti-Israel bias. The move is heartily welcomed by Israeli politicians.

March 6 – Trump sends a congressional committee to Israel to investigate moving the embassy to Jerusalem. At a press briefing, Rep. Ron DeSantis (R-FL) says he expects the president to let a waiver which postpones the moving of the embassy every six months to expire in honor of the 50th anniversary of the liberation of Jerusalem in May. Once the waiver expires, it will become law to establish the US embassy in Jerusalem.

March 14 – President Trump dispatches Jason Greenblatt, his international negotiations advisor and an Orthodox Jew, to Israel in order to jumpstart the peace process between Israel and the Palestinians. Greenblatt meets separately with Netanyahu and Palestinian President Mahmoud Abbas, but there are no visible “peace” developments.

March 31 – The White House officially approves Netanyahu’s request to build the first new settlement in the Jewish homeland in over 20 years, with the caveat that Israel hold back on additional settlement construction.

April 2 – Talks between the US and Israel on curbing settlement construction are suspended with little to show.

April 20 – The White House announces Trump will host Abbas in Washington on May 3 in hopes of crafting a “conflict-ending” deal.

April 24 – In a moving speech to a leading Jewish group, Trump extolls the “unbreakable spirit of the Jewish people” and vows “never again” in honor of Israel’s Holocaust Remembrance Day. The speech draws praise and admiration from Jewish groups on both sides of the political spectrum.

April 26 – It is announced that plans are in the works for Trump’s first-ever visit to Israel at the end of May.

April 27 – Israeli media reports that during Trump’s first trip to Israel, he will recognize Jerusalem as Israel’s undivided capital, but will not let the waiver mandating the embassy move expire.

April 28 – In opposition to previous reports, Rep. Ron DeSantis repeats his conviction that Trump will announce the moving of the US embassy to Jerusalem during his visit, which will coincide with the Jerusalem Jubilee, or celebration of 50 years of unity in the holy city.

It is too early to tell whether or not Trump will uphold his promises to the state of Israel in terms of moving the embassy, encouraging expanded settlement or taking apart the Iran nuclear deal. What is clear is that the US and Israel have truly begun a new phase in a storied relationship which holds infinite promise for lovers of Israel.