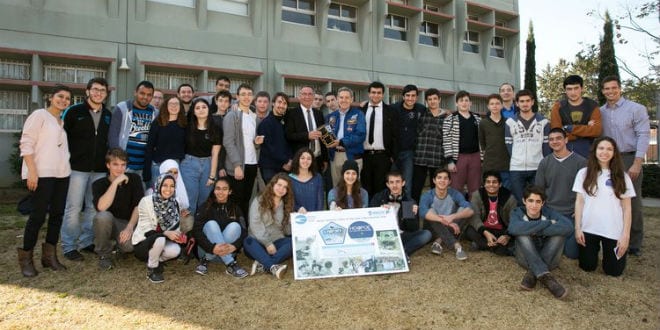 After the satellite’s scheduled arrival at the International Space Station in about two days, it will be sent into orbit around Earth for about a month and a half using a special robotic arm operated by astronomers.

Only 28 of the 50 groups around the world that have started working on nanosatellites have succeeded in making a product that passed NASA’s rigorous tests. Israel is the only country of the 23 participating in the European Union’s QB50 thermosphere research program to have its satellite built by high school students. The satellite seeks to map the outer layer of the atmosphere and that would play a crucial role in the transmission of GPS signals.

Duchifat 2 is a joint project of the Israel Space Agency (ISA), the Science Ministry, and the Herzliya Science Center. More than 80 high school students from towns and cities such as Ofakim, Yeruham, Ofra, Hura. and Herzliya worked for two years on the development of the satellite.

The students were divided into ten teams, each responsible for a specific domain of the project, such as technical testing, satellite data decoding, and system engineering. They were accompanied by engineers from academia and from Israel Aerospace Industries (IAI). The satellite successfully passed the tests carried out in IAI’s labs, which can simulate conditions in space.

The nanosatellite weighs about 1.8 kilograms and measures 10x10x22.7 centimeters. The tiny size of the satellite does not exceed the size of a milk carton and thus keeps costs low. It is equipped with a sophisticated control system that directs the satellite in space and allows for accurate measurements to be provided. The system can also reduce friction with atmospheric particles, thus prolonging the satellite’s lifetime in orbit.

The satellite is the second nanosatellite of its kind built by Israeli high schoolers. Duchifat 1, which tries to provide assistance in locating lost travelers around the world, was successfully launched in 2014 and is still active in space.

Herzliya Mayor Moshe Fadlon called both Duchifat projects “a tremendous achievement by any and all measure.” He further claimed that they are testament to both the success of municipal investment in education in general, in scientific education in particular, and of the high potential of Herzliya youth.

“We are contributing to the advancement of Israel’s technological and scientific future,” he said.

“Duchifat 2 is not only an educational project that introduces space to youngsters and paves the way for tomorrow, but is also part of an international research project,” explained Science Minister Ofir Akunis. “The launch of the satellite is another step by the ministry to promote space-related education, research, and public awareness.”