Nationwide Manhunt for Man Who Posted Murder on Facebook

Home » Nationwide Manhunt for Man Who Posted Murder on Facebook 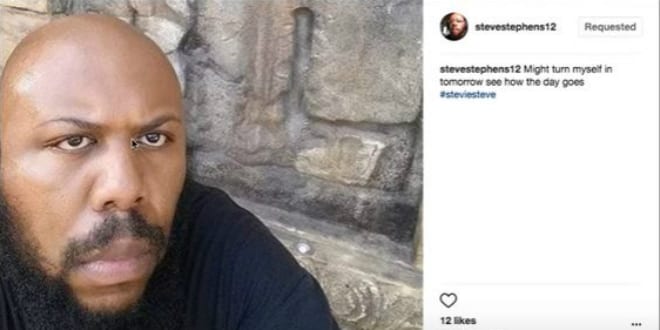 A nationwide manhunt is  still underway for Stevie Stephens, the man who murdered a random man and posted the chilling video on Facebook. The family of the victim, a devout Christian, has publicly forgiven the killer as an expression of faith.

Last Sunday, Stephens posted a chilling video of him committing a murder. In the video, Stephens is seen driving up to 74-year-old Robert Godwin on a street in Cleveland, Ohio. Stephens pulled out a gun, and asked him, “Can you say Joy Lane?”

Stephens then shot Godwin in the head before driving away. He then boasted that he had killed 14 others and would continue his murderous spree until the police caught him, but police have reported no other related killings.

Stephens posted the video on Facebook on Sunday around 4pm, calling it “an Easter day slaughter”, but Facebook removed the video a few hours later. Stephens, a children mental health worker, reportedly snapped after ending a relationship and losing all his money from gambling.

Frank Jackson, mayor of Cleveland, announced on Monday afternoon that a $50,000 reward was being offered by the FBI and police for information leading to the arrest of Steve Stephens, 37. Stephens is believed to be driving a white Ford Fusion with the temporary Ohio tag E363630. Stephens can be seen getting out of a white car in the video.

Godwin, father of ten, was a devout Christian and was killed while walking home from the Easter meal with his family.

This is me and my dad on Father’s Day 2015. #RobertGodwinSr RIP. pic.twitter.com/B2X0suE4AR

His family released a message to the killer via the press:

“To the young man who murdered my daddy, I ask that you please surrender. I forgive you, and love you but most importantly, God loves you. God can heal your mind and save your soul. PLEASE!”

In an interview with CNN, the family forgave their father’s killer as an expression of the Christian faith they learned from their father.

“Each one of us forgives the killer, the murderer,” Godwin’s daughter, Tonya Godwin-Baines said Monday. “We want to wrap our arms around him.”
The family is requesting that the video of their fathers murder not be circulated or shared. They have not created a
GoFundMe account, though there have been reports of false accounts being created.