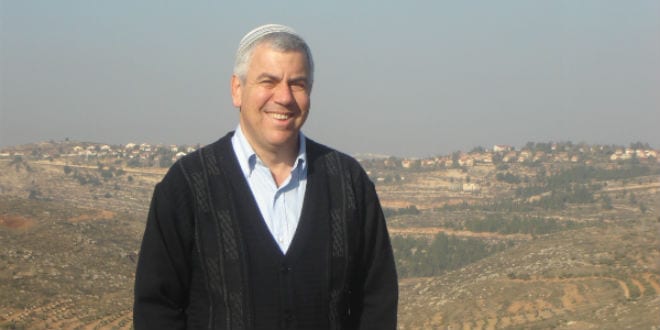 The Biblical city of Shiloh, nestled in the Samaria heartland about a 40-minute drive from Jerusalem, has broken ground for the first Jewish boys’ high school in the region in 3,300 years. Though the area boasts two girls’ high schools within a 15-minute drive from central Shiloh (religious boys and girls generally study in separate schools), teenaged boys in the area have been forced to leave their family home at the young age of 14 in order to continue their high school education.

“Shiloh was re-established in 1978,” explained David Rubin, founder of the Shiloh Israel Children’s Fund, former mayor of Shiloh, and terrorism expert. “Teenaged boys have traveled great distances on dangerous roads to get an education. Many have been forced to stay full-time in dormitory schools because there was no high school for them nearby.”

Sending young teenaged boys away from their families has led to many challenges. The Biblical heartland has experienced a disproportionate amount of terror attacks on its roads causing numerous harm and even death to many of the area’s citizens. Rubin himself, along with his then three-year-old son, miraculously survived a terror attack many years ago.

“That son is now serving in the Israeli army,” shared Rubin. “However, for many years he struggled to overcome his wounds, both physical and emotional. That is one of the reasons I started the Shiloh Israel Children’s Fund. Thousands of young people in this area need an educational system which also provides therapeutic programs in order to heal their traumas.”

In fact, two terror victims are participating in the building of the Shiloh Israel Children’s Fund’s boys’ high school. Moshe Avitan is the site manager and Benny Shoham  is a builder. Both survived horrific car ambushes at the hands of Palestinian terrorists; Benny’s son was killed.

Shoham shared, “I have built many apartments. But this [high school], in particular, is so rewarding. The terrorists murdered my son and almost killed Moshe. I can’t bring my son back. But to build this local school for so many children is an excellent response to Islamic terrorism.”

Presently, the school is being built in a temporary structure until the funds are raised to complete the new campus. “This new high school will bring greater safety to our children, strengthen parent-child bonds and even help kids stay connected to God,” said Rubin. “There are unfortunate stories about boys who had to go away for high school and because they were not under their own parents’ tutelage and watchful eye, they lost their attachment to observant Judaism.”

Rubin notes the irony that young people growing up in Shiloh, where the Tabernacle stood for 369 years, making the city the epicenter of religious observance for the Jewish people when they arrived in the Holy Land for the first time, could become disconnected from their Biblical roots simply because they do not have a high school nearby.

“Historically, Shiloh was the the first capital of the Jewish nation and the center of the Holy Land.” Rubin said. “Unfortunately, in today’s anti-Israel climate and lack of accurate education, people have forgotten its importance to the nation of Israel and in Scripture. We are praying that building this high school will help put Shiloh back on the map of outstanding places to visit, live and be educated.”