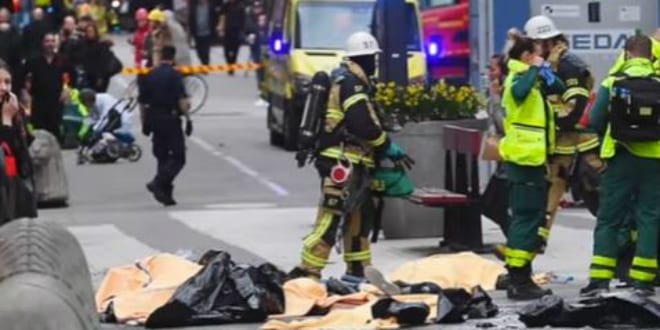 A terrorist killed four people and injured at least fifteen by driving a stolen truck through a crowded shopping area before plowing into a department store in Stockholm, Sweden on Friday afternoon. The driver fled after the attack but police arrested a 39-year-old man from Uzbekistan on Saturday morning.

The attacker drove the truck into an Ahlens department store at approximately 3 pm local time (9 am EST), after which the truck caught on fire.

“We confirm that we have found a device in the truck that doesn’t belong there. We are now investigating its content,” Dan Eliasson, chief of the Swedish Police said at a press conference on Saturday. “Whether this was a classic bomb or some sort of flammable device is now a matter for our analysis.”

Sweden’s public broadcaster SVT reported that a bag of explosives was found inside the truck on the driver’s seat and the suspected attacker suffered burns from a partial detonation. The truck was stolen minutes before the attack as it made a delivery at a restaurant.

Police are treating the attack as a possible case of terrorism and have said the suspect expressed support for the Islamic State (ISIS) online and was known to authorities.

The attack comes less than two months after US President Donald Trump became the focus of criticism for referring to terror in Sweden in a Florida speech. Though the president’s reference to a previous attack in Sweden was inaccurate, this recent attack underscores tensions in the country over its growing refugee population.