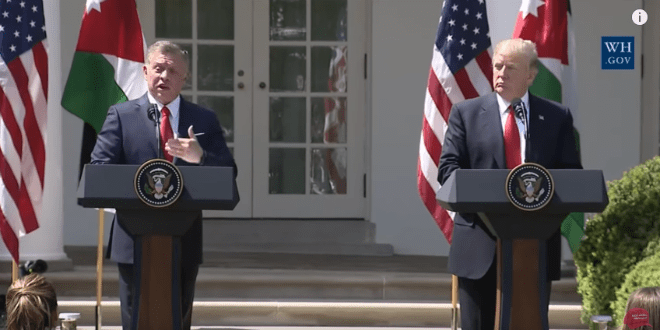 Jordan’s King Abdullah II met with President Donald Trump at the White House Wednesday, following an Arab summit hosted in the Hashemite kingdom last week and amid talk of a new regional peace initiative headed by the Trump administration.

In a press conference with Abdullah at the White House Rose Garden, Trump said that he will work with the Jordanian leader to obtain a peace deal.

“The king has been a really tireless advocate for a solution,” Trump said. “He’s going to help me with that — and help me at the highest level. We will be consulting with him very closely in the days ahead.”

Abdullah, who is visiting Washington for several days and met with Egyptian President Abdel Fattah El-Sisi yesterday, characterized the Israeli-Palestinian conflict as “essentially the core conflict” of the region.

Abdullah also mentioned the Saudi-backed Arab Peace Initiative, which he said “offers a historic reconciliation between Israel and the Palestinians, as well as all member states in the Arab League. It is the most comprehensive framework for a lasting peace.”

“It ensures statehood for the Palestinians, but also security, acceptance and normal ties for Israel with all Arab countries and, hopefully, all Islamic countries,” Abdullah added.

“You will find a strong ally in Jordan supporting you on all your policies,” Abdullah also told Trump.

In their meetings Trump and Abdullah are expected to discuss the Arab consensus on the Middle East peace process as well as the possibility of convening Israel, the Palestinians and Arab leaders from Jordan, Egypt and the Gulf states for a U.S.-backed regional summit this summer.  Joining the leaders in their meetings was Jason Greenblatt, Trump’s senior adviser on international negotiations who has visited the Middle East in recent weeks, Secretary of State Rex Tillerson and Jared Kushner.

Wednesday marks the second meeting between the American and Jordanian heads of state since Trump took office in January, and comes after the U.S. president met Monday with Egyptian President Abdel Fattah El-Sisi. Additionally, Trump will meet with Palestinian Authority President Mahmoud Abbas later this month.

During their previous meeting in February, Abdullah and Trump had discussed “Jordan’s critical contributions to defeating ISIS and “the possibility of establishing safe zones in Syria,” according to a readout provided by the White House. Trump also emphasized Jordan’s “essential role in serving as a model of tolerance and moderation in the region.”