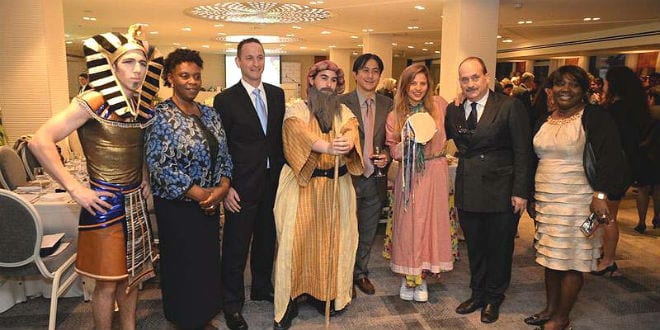 More than 80 ambassadors and other senior diplomats stationed in Israel attended a festive model seder dinner in Tel Aviv, organized by the Israel Project and the World Jewish Congress.

The seder was led by former Israeli ambassador to the UK Daniel Taub, who entertained and educated the guests with a taste of the Passover traditions.

For most participants, this was their first seder meal, during which they got to taste matzah, charoset, and karpas, and search for the afikoman.

Among the diplomats attending were the ambassadors of Bulgaria, Poland, Switzerland, Turkey and Uruguay, and senior representatives from the United States, Germany, the United Nations and the European Union.

Special Haggadahs, seder guidebooks, were published for the event, so the diplomats were able to sing along with the “Ma Nishtana” and “Echad Mi Yodea.”

According to TIP Vice President Lior Weintraub, the combination of foreign ambassadors with Israeli guests, sitting together around the seder table, allowed a unique interaction and provided a glimpse into Israeli tradition and society. Such events help showcase Israel and Israelis in a positive light, he noted.

Shai Hermesh, chairman of WJC-Israel, said in a statement: “The WJC is thrilled to share with members of the diplomatic corps the rich traditions of Pesach. This holiday represents an especially uplifting and inspiring story of deliverance and rebirth which is passed down from generation to generation around countless tables in Israel and the remotest corners of the Jewish Diaspora. We know that breaking matzoh around the seder table is an especially enriching and memorable experience for all our friends.”