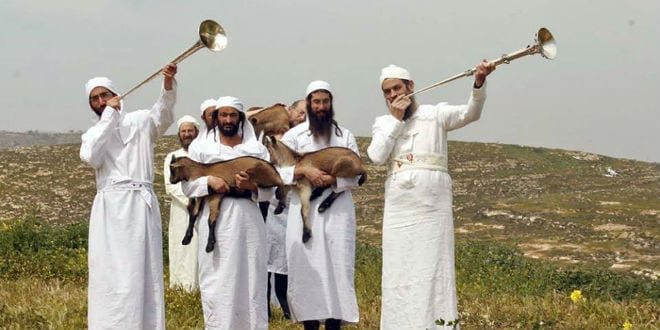 The Israeli police, in direct contravention of the law are preventing the Sanhedrin from holding a reenactment of the Passover Temple Service.  At stake are basic human rights, with the Israeli police giving in to the threat of Islamic violence.

For the last fifteen years, the Sanhedrin has hosted a full-dress reenactment of the Pesach (Passover) sacrifice in Jerusalem. The Temple ceremony on Pesach was perhaps even more important than the one held on Yom Kippur since every Jew was required to actively participate. The Sanhedrin reenactments have included Kohanim (men of the priestly caste) dressed in authentic vestments, accompanied by the proper musical instruments, and utilizing vessels that have been created for use in the Third Temple. A lamb is slaughtered and roasted on a model altar, under the supervision of a veterinary inspector.

Last year, the reenactment held on the Mount of Olives overlooking the Temple Mount was attended by approximately 1,000 people. For this year’s reenactment scheduled for next Thursday, the Sanhedrin rented an open space at the Davidson Center, an archeological park adjacent to the Western Wall, owned by a corporation that is overseen by the Ministry of Construction and Housing. The organizers of the reenactment received permission from the corporation to hold the ceremony on their grounds on the condition they also received permission from the Israeli police. The police has refused to give permission  for the ceremony to take place.

Rabbi Hillel Weiss, spokesman for the nascent Sanhedrin, emphasized the importance of this ceremony and what the battle represents.

“The Israeli police are expanding the borders of the Islamic authority beyond the Temple Mount,” Rabbi Hillel Weiss said to Breaking Israel News. “We request that every man and all the nations express to the Israeli government that it is time for them to take their role in bringing all of humanity to freedom through the Pesach sacrifice, for which this reenactment is a preparation. This sacrifice brought us out of Egypt and we need it again to end this long exile completely.”

“We believe that this is the only path to world peace: by recognizing the God of Abraham via the Jewish Temple,” Rabbi Weiss said. “We are requesting this from the world as Jews, living freely in our land.”

It is disturbing and poignant that this battle has already been won in the High Court but the Israeli police still do not enact the law as established by the court. The Jerusalem police have already lost court cases brought against them for violating this right. Rabbi Yehudah Glick, a Temple Mount activist for years who is now a Likud Knesset Member, won a case in 2015 which upheld his right to pray on the Temple Mount. He had been banned from the site due to a video showing him praying. Despite the court ruling, Jews are still prevented from exercising this right at the Temple Mount, ad a new case has been brought against the Jerusalem police by The Friends of the Temple organization, headed by Yaakov Hayman. Last year, the Jerusalem police arrested dozens of Jews on their way to Jerusalem to perform private reenactments before Passover.

The Jerusalem police cite security concerns for these prohibitions, claiming that the Muslim Palestinians will react violently. But the Sanhedrin’s Passover ceremony will be on a site that has no Muslim significance, and in Temple times served as stairs leading up to the Temple entrance.

Ze’ev Elkin, the Minister of Jerusalem Affairs, commented on the situation, saying, “It is absurd that in the Jewish State Jews are arrested for trying to perform a Jewish ceremony.”

“It is clear that if there is to be a change in this matter, it must come from public outcry, and from more Jews going up to the Temple Mount” Elkin said. “Unfortunately, I don’t see any solution coming from the High Court. Despite this cause being correct in every manner, this is precisely the type of circumstance that the High Court should step in, but instead, they have relinquished total control to the police. This is an attack on the most basic rights of the citizens.”

The Sanhedrin has initiated a Headstart crowdfunding campaign for the Passover reenactment and for the court battle to allow it to take place.