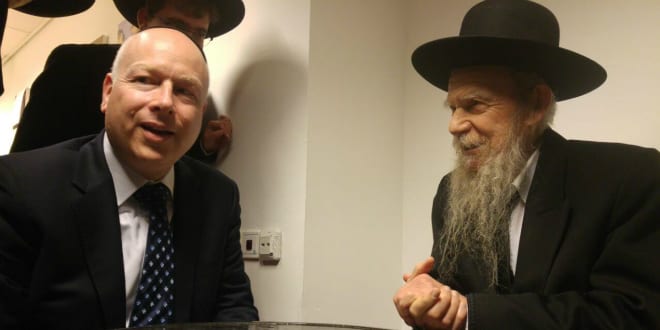 Jason Greenblatt may succeed in the seeming impossible task of jump-starting the clinically dead negotiations between Israel and the Palestinian Authority because he has an ace up his sleeve: he has God on his side.

Greenblatt, appointed by President Donald Trump as the United States’ Special Representative for International Negotiations, has been charged with the daunting task of restarting negotiations. Israeli Prime Minister Benjamin Netanyahu briefly shook hands with PA President Mahmoud Abbas at the funeral of Shimon Peres last September, but the last time the two leaders met for negotiations was in 2010.

Greenblatt spent last week in Amman, Jordan but arrived in Jerusalem on Wednesday. He attended a conference of Orthodox Jews in Jerusalem celebrating the beginning of the Passover vacation. While there, Greenblatt, a religious Jew, met with one of Israel’s most esteemed rabbis: Rabbi Gershon Edelstein, head of the Ponevezh Yeshiva in Bnei Brak, considered one of the leading institutions for the study of Torah.

Greenblatt spoke with the rabbi in Hebrew, asking his advice. “Tell me,” Greenblatt asked the rabbi. “How can I gain the intelligence to fulfill this function?”

Rabbi Edelstein answered directly. “In heaven, a man who does good acts, or even wants to do good, the heavens will help him to do so. With heaven’s help,” the rabbi said.

Greenblatt was so taken with the rabbi that he posted a photo of their meeting on his Twitter site.

The US Embassy released a statement about Greenblatt’s mission in the region.

“[Greenblatt] reaffirmed President Trump’s personal interest in achieving a peace deal between Israel and the Palestinians and his belief that such a peace agreement is not only possible, but would reverberate positively throughout the region and the world.”

There has been much speculation in the media about the negotiations. Channel Two reported last week that President Trump requested the Prime Minister Netanyahu agree to limit Jewish building in Judea and Samaria in order to forward a peace agreement.

At a cabinet meeting on Sunday, Netanyahu refuted that claim, stated that there has been no such request.

“In the past few days there have been reports in the media about alleged agreements in the talks we are holding with the White House regarding settlement construction,” Netanyahu told his cabinet. “There are many incorrect things in these reports, I will not go into details. Our talks with the White House are continuing and I hope they will end soon.”