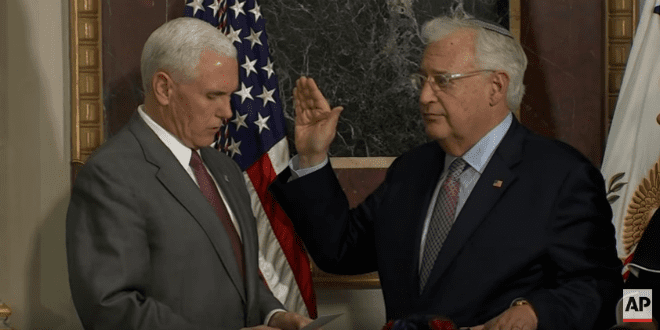 President Donald Trump’s nominee for US ambassador to Israel David Friedman was sworn into office on Wednesday, taking the solemn oath, administered by Vice President Mike Pence, with his hand on the Bible – and a small Jewish twist.

“Please raise your right hand and repeat after me,” Pence instructed. “I, David Friedman, do solemnly swear…”

However, Friedman’s repetition had a slight alteration.

“I, David Friedman, do solemnly affirm,” the bankruptcy lawyer said, pausing before making the change, “that I will support and defend the constitution of the United States.”

Friedman’s small but deliberate switch in the wording of the oath derives directly from the Bible. The seventh commandment instructs that God’s name may not be taken in vain.

Thou shalt not take the name of Hashem thy God in vain; for Hashem will not hold him guiltless that taketh His name in vain. Exodus 20:6

In Judaism, taking an oath is a serious and binding act which requires a ceremony called hatarat nedarim, or annulment of vows, in front of three witnesses in order to void. Therefore, observant Jews studiously avoid making oaths. A common phrase used in everyday conversation, “bli neder” (“without vow”), is often tacked on to any kind of promise or guarantee to indicate that no oath has been made.

Indeed, many religious soldiers of the Israel Defense Force (IDF) choose not to say “ani nishba” – “I swear” – at their swearing-in ceremonies, preferring instead to say, “ani matzhir” – “I declare”.

David Friedman, a religious Jew, also wore a kippa at the ceremony, which at many points during his confirmation process seemed destined not to happen, as his appointment received fierce opposition from pro-Palestinian activists and liberal Jews, who perceive Friedman as being too right-wing.

Indeed, Friedman declared shortly after his nomination that unlike previous ambassadors who inhabited the official residence outside Tel Aviv, he would live in Jerusalem as an implicit US recognition of the city as Israel’s eternal capital.