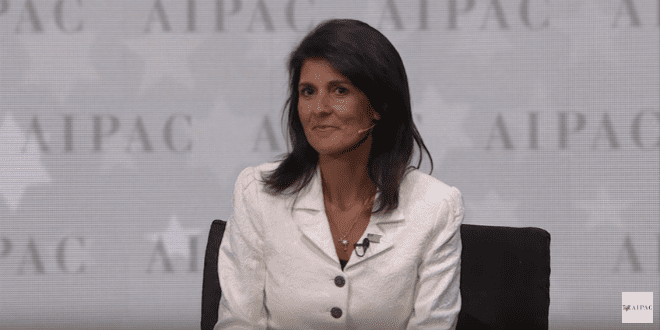 U.S. Ambassador to the United Nations Nikki Haley, describing herself as the “new sheriff in town,” said at the AIPAC Policy Conference that her approach to fighting anti-Israel elements at the world body is to “kick them every single time” they display their bias.

Haley has been widely praised in pro-Israel circles for her efforts to change the U.N.’s Israel discourse during the Trump administration’s nascent days. Most recently, the U.S. demanded that the U.N. withdraw a report accusing Israel of apartheid. Indeed, the report—authored by Richard Falk, a discredited former U.N. special rapporteur who has an extensive record of anti-Israel rhetoric—was removed by the U.N. Further, Rima Khalaf, the head of the U.N. agency that released the report, resigned from her post.

“I don’t know who the guy is, or what he’s about, but he’s got serious problems,” Haley said Monday regarding Falk.

“For anyone who said you can’t get anything done at the U.N., they need to know there’s a new sheriff in town,” she said.

Haley, the former governor of South Carolina—which under her leadership became the first U.S. state to pass legislation against the anti-Israel BDS movement—earned constant standing ovations throughout her speech. She was visibly touched by the warm reception, putting her hand on heart towards the end of her time on stage.

The daughter of Indian parents, Haley noted some Israeli-Indian cultural similarities, including that the communities are both close-knit, family-oriented and passionate about philanthropy. “So that’s all the good things,” she quipped, before adding, “We’re aggressive, we’re stubborn and we don’t back down from a fight.”

The envoy said she is “not here to play” at the U.N. and would ensure that America starts “leading again” on the international stage.

“Leading is saying and doing things when it’s not comfortable,” she said.

Recalling last December’s U.N. Security Council Resolution 2334—which described eastern Jerusalem and its Jewish holy sites as “occupied Palestinian territory,” and was passed following the Obama administration’s refusal to veto the measure—Haley vowed such an incident “will never happen again.”

“The days of Israel-bashing are over” are the U.N., she declared.