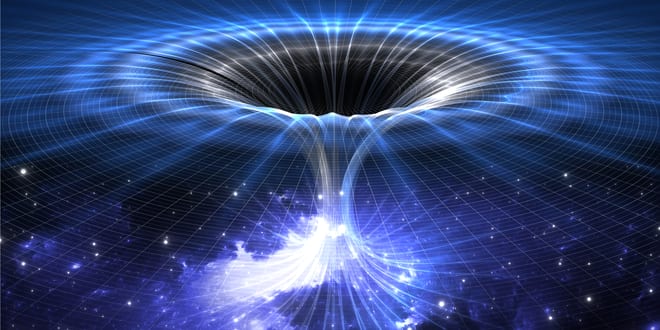 Physicists have discovered a quantum portal into a separate, dark universe, bringing them closer to understanding the first moments of creation. One physicist and man of faith thinks this discovery could offer partial proof of God.

Quantum physicists have speculated that in the early days of the universe, visible particles were formed along with hidden, or dark particles, which, though completely unobservable, would have had to exist in order to make the universe expand at the known rate.

The dark particles are beyond the limits of scientific observation, but their effects on our universe are enormous, so great that physicists believe that roughly 68 percent of the universe is dark energy, with dark matter making up about 27 percent. The rest, everything observable with man-made instruments, adds up to less than five percent of the universe.

Quantum scientists theorized dark matter and dark energy exist in a parallel, though not symmetrical, universe. This separate dark universe is connected to ours via quantum portals.

Scientists at the Center for Theoretical Physics of the Universe believe they have discovered one of these portals via a newly discovered subatomic particle called a heavy quark. It is believed that heavy quarks have a “dark charge” which allows them to act as a bridge between the two universes, but as scientists are unable to observe dark particles or dark energy, no more is known about the parallel universe other than the fact of its existence.

Science has long been seen as the enemy of religion, and quantum physics, delving into the secrets of creation, is on the forefront of this battle. Dr. Gerald Schroeder,  a Torah scholar with a PHD in physics from MIT, disagrees, telling Breaking Israel News that he believes the discovery reveals the natural aspect of God.

“Quantum physics has discovered that we can create the universe from nothing, provided we have the forces of nature,” Professor Schroeder said, explaining that this understanding actually supports Biblical creation. “The laws of nature aren’t physical: they act on the physical. They predate the universe.”

Before the mountains were brought forth, or ever Thou hadst formed the earth and the world, even from everlasting to everlasting, Thou art God. Psalms 90:2

“That is the Biblical definition of God,” Professor Schroeder explained. “Science has discovered Elohim, the natural aspect of God described in Genesis. The one crucial thing we need to add is that which created the universe is still active in the universe.”

In fact, the discovery is evidence that human senses are simply unable to access everything in the world – that some aspects of existence are simply unknowable, and thus divine, he concluded.

“Dark matter is proof that there are dimensions we interact with but we cannot sense. These forces, which are dark to science, are a part of the creative universe. This has brought science to a partial definition of God.”