Convicted Terrorist Agrees to Leave US 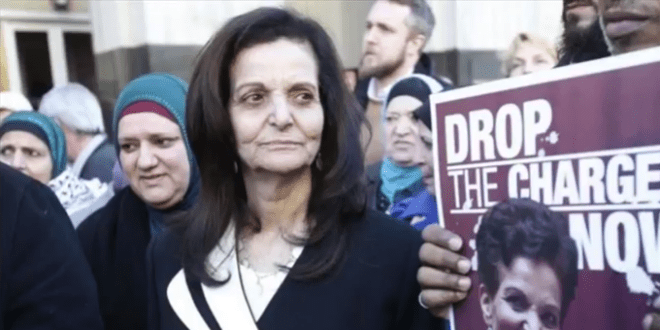 Rasmeah Odeh, sentenced to life imprisonment in Israel for terror bombings and convicted of immigration fraud in the US, has agreed to  plead guilty at her appeal next month and leave the United States. Odeh was one of the organizers of the nation-wide anti -Trump women’s strike held three weeks ago.

William Goodman, a member of her legal team, made a statement to the media on Thursday that Odeh agreed to plead guilty at her appeal on April 25 in exchange for no time in prison.

In addition to organizing the women’s strike, Odeh is slated to be a featured speaker at the national conference for Jewish Voices for Peace (JVP) next week in Chicago. It is now unclear whether she Odeh will be able to attend.

Justice4Rasmea, an organization that has been supporting her cause, considered this a victory, since she will not serve any of the 18 months she was sentenced to in a US federal court. A statement posted to the website claimed she cannot get a fair trial in the United States federal court “under the regime of racist Attorney General Jeff Sessions.” The website called her an icon “of the movement for social justice in the US from the Movement for Black Lives in Ferguson, Chicago, and beyond, to the call for a global #WomenStrike on International Women’s Day”.

Odeh was arrested in Israel in 1970 for her participation in two terrorist bombings and for membership in the illegal organization, the Popular Front for the Liberation of Palestine (PFLP). Two Israelis were killed in one of the bombings. Her conviction was based on testimony by her co-conspirators, who implicated Odeh, claiming she had instigated and organized the bombing. In addition to the testimony, bomb-making materials identical to those used in the attacks were found in her bedroom.

One day after her arrest, Odeh confessed to the bombings. At the same time, she was also convicted of an attempted bombing of the British Consulate. Odeh was sentenced to life imprisonment, but was released as part of a prisoner exchange with the PFLP in 1980.

In 1995, Odeh entered the US. In 2004 she applied for citizenship, which was granted. In 2013, Odeh was arrested for immigration fraud, since she lied on her application by stating she had no criminal record. She also claimed her only country of residence had been Jordan. In her trial, Odeh claimed she suffered from Post Traumatic Stress Disorder as a result of weeks of sexual torture by Israeli security forces, despite having confessed the day after her arrest.

In March 2015, Odeh was sentenced to 18 months in a federal prison, and ordered deported to Jordan after completing her sentence. She has been out on bail since her conviction.