US vs. UN: Honest Policy Change, or Window Dressing?

Home » US vs. UN: Honest Policy Change, or Window Dressing? 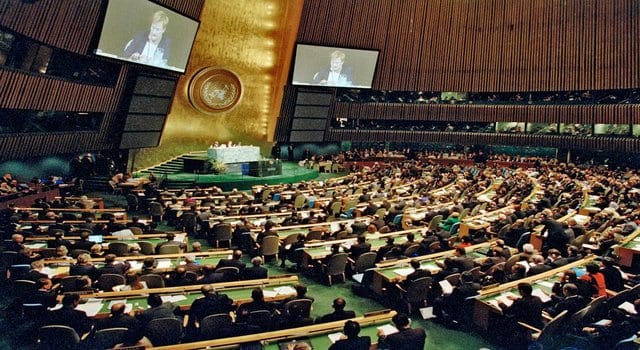 On one hand, Nikki Haley, US Ambassador to the United Nations, has called repeatedly on the world body to address the organization’s anti-Israel bias and “breathtaking double standards.” Earlier this week, the State Department instructed US representatives to boycott a UN Human Rights Council session on the progress of the implementation  of Resolution 31/35, aimed at “ensuring accountability and justice for all violations of international law in the Occupied Palestinian Territory” and ferociously denounced a report by the United Nations Economic and Social Commission for Western Asia accusing Israel of “apartheid.”

On the other hand, there are also indications that right-wing celebrations when Trump took office on 20 January were premature: The US embassy has not moved to Jerusalem, nor is there any indication that the State Department is making plans for that move any time soon.

Furthermore, there are clear and growing signs that Trump’s policy on Israeli settlement in Judea and Samaria is not radically different than President Obama’s. Before departing China on Wednesday, Prime Minister Netanyahu said that “significant progress” had been made with the Trump administration on the issue of the construction in Judea, Samaria and eastern Jerusalem, but Thursday Israel Radio quoted an unnamed government official who said the administration would likely limit its approval for settlement building to existing settlement blocks.

Zionist Union MK Moti Yogev rejected the notion that Trump would de facto remain loyal to previous administration’s policy on settlement building, but refused to offer details about the differences. In response, Zionist Union Knesset Member Nachman Shai said it was clear Trump will follow traditional American policy on the issue and blasted the Jewish Home party for “proving” they are more interested in “comfortable chairs as cabinet ministers” than showing fealty to their ideology [by leaving the government].

Professor Jonathan Rynhold, a Bar Ilan University expert in US-Israel relations and Israeli politics and foreign policy and a senior researcher at the Begin-Sadat Center for Strategic Studies (BESA), said the administration’s true policy is likely reflected in its approach to Israeli building projects in Judea and Samaria, rather than pro-Israel statements at the United Nations.

“There is not much that can be done about the UNHRC, so the US shows disdain for a body whose esteem is already low. What is relevant, politically speaking, remains the settlement issue in bilateral negotiations,” Rynhold explained to Tazpit Press Service (TPS).

“Explicit US support for Israel at the UN is doubtfully calculated, but it is also true that the better credentials one has for being pro-Israel, the more leverage the person will have to pressure Israel on the settlements and get his or her way while countering Israelis who doubt the person’s motives,” he added.

Rynhold also said that in contrast to the beliefs of many Israelis, there actually is a consensus in the Western world that the UN is biased against Israel. In this way, Trump’s view on the subject are not unique. The difference today is that President Trump is prepared to be aggressive about it because he is less concerned about potentially damaging the UN standing.

“We are witnessing a change in emphasis. Trump is harder rhetorically on the UNHRC than Obama was but softer on settlements. This is not a revolutionary change. The US administration remains opposed to settlements, much like half of Israel is,”  explained Dr. Rynhold.

On the other hand, some experts say the vocal support for Israel at the UN emanating from the Trump administration could have a broad impact on international policy vis-a-vis-à-vis Israel, even if the public statements denouncing the world body are ultimately self-serving. Dr. Ofer Israeli, an international security policy expert and research fellow at Haifa University’s National Security Studies Center (NSSC), told TPS that while the US could be using the Israel issue in order to justify a pre-existing policy to reduce funding to the UN, the policy could ultimately turn out to be beneficial to Israel.

“The United States is still a key player on the international stage, and many countries follow in Washington’s footsteps. If the [current trend] continues, Israel could benefit greatly,” Israeli said.