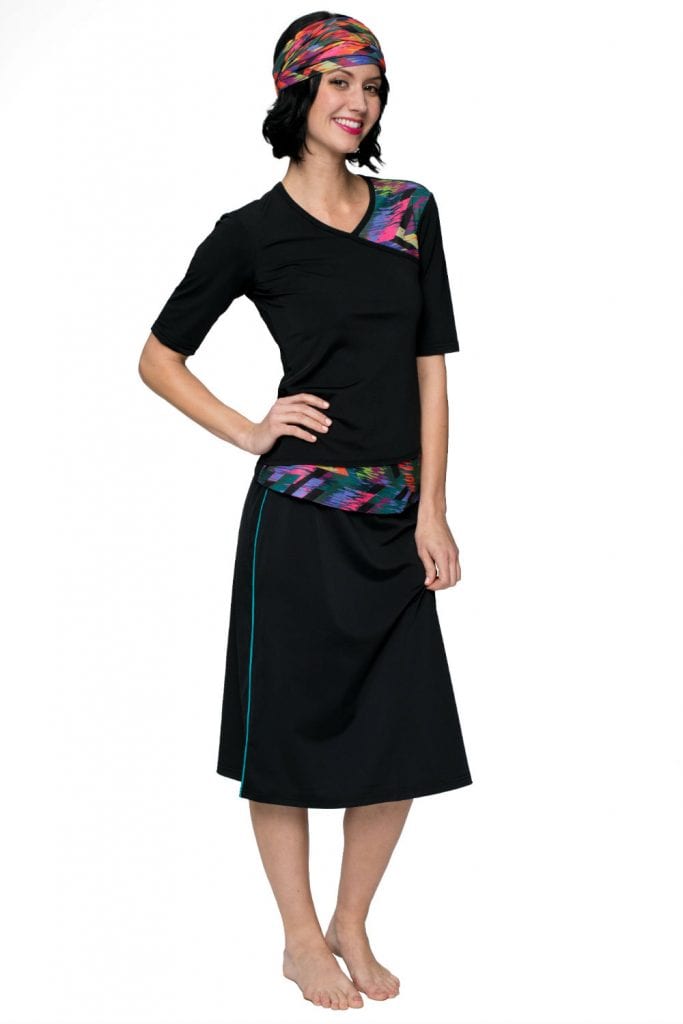 With the abundance of immodest images plaguing nearly every home or phone that has media access, more and more people are seeking modest clothing to reclaim their own sense of dignity. Even women not necessarily connected to religious dictates are seeking more modesty in their fashion choices.

“Traditional Judaism views modesty (called tzniut in Hebrew) in a holistic way,” explained Sara Wolf, co-founder of HydroChic, a company based both in Israel and in  the USA which produces fashionable modest swim and activewear, to Breaking Israel News. “This includes the manner in which one speaks, walks, thinks and dresses.”

Most religions believe that clothing testifies to the inner dignity and honor of the human being as every person possesses a Divine soul. Talmudic sages refer to one’s clothing as “that which gives honor”.

HydroChic, started ten years ago by two Orthodox Jewish women following their move to Israel, are the forerunners of today’s more modest fashion revolution. “Before HydroChic, women were often seen pool-side or at the beach wearing oversized t-shirts on top of their swimsuits,” continued Wolf. “Today, nobody wants to look frumpy. Women more commonly seek to look trendy in every situation, even while swimming and doing sports.“

The HydroChic founders credit their success to a combination of things: Their attention to detail and their fashion flair, as well as a strong  desire to fill the fashion void in modest swimwear. That, combined with the feeling that they are performing God’s will by offering functional and beautiful modest swim and activewear, is the driving force behind their company.

“In addition to the trend towards more modest clothing, people are becoming more health-conscious,” noted Daniella Teutsch, co-founder of HydroChic, to Breaking Israel News. “That has encouraged us to expand our line for women with special health issues such as those with lupus, psoriasis, or those who have had reconstructive surgery. For example, we offer a mastectomy swim bra option. All fabrics that we use offer UPF 50+ sun protection.”

The company also offers a line of modest swimwear for young girls who struggle to find modest swimwear options in today’s market, where girls’ fashion is often inappropriate for their age.

The Bible teaches that God placed in every woman an innate sense of modesty.  Proverbs 31:25 states: “Strength and dignity are her clothing.” The HydroChic founders believe that they are on the cutting edge of a social revolution in which women, tired of unrealistic expectations about their bodies, are returning to valuing their privacy.

With these points in mind, Teutsch and Wolf accommodate consumers who want to live active lifestyles without sacrificing style, fashion, fit, or comfort.

It appears that modest dress for every activity and fashion taste is now catching on and more readily available. “It’s nice to know that following Biblical dictates is once again in fashion,” smiled Wolf.