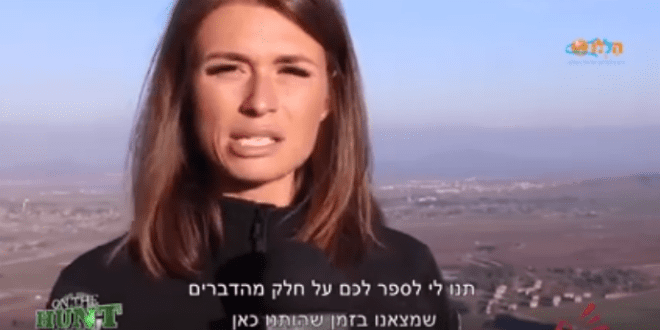 A Christian journalist’s brutally honest report on her news team’s recent fact-finding mission to Israel went viral this week, busting myths about the Israeli-Palestinian conflict and spreading the message that the situation in the Holy Land is very different from what most people think.

Four journalists from The Rebel, a Canadian right-wing political and social commentary site, arrived in Israel last week for an intense tour of the hotspots featured in media coverage, beginning with Jerusalem and moving to Sderot, a city on the southern border with Gaza under constant threat of shelling. On a windswept mountain overlooking Israel’s border with Syria, reporter Faith Goldy described how the journey had revealed the truth about the regional conflict between the Jews and the Palestinians.

“Frankly, this has been one big myth-busting trip. I came here with an open mind,” began Goldy in a segment for her show, On the Hunt. While her site has a conservative bent, she emphasized that her team had searched out a wide variety of perspectives and opinions.

Her first revelation concerned the much disputed security wall. Much to her surprise, it was a mere fence.

“We found that Palestinians can actually freely come into Israel, so long as they are not carrying any explosives,” Goldy said, with more than a bit of bitterness in her voice. “But you know who can’t go the other way? It’s actually the Jews.”

“That’s according to self-prohibition,” she noted. “But it is also because they know that if they go in there, there is a very good chance they will probably die.”

Goldy, who describes herself as a devout Catholic, was disappointed by her visit to Bethlehem, where she was shocked to discover posters “exalting suicide bombers” in the city she considered holy.

Her report on that trip became the focus of controversy when she posted a video on her Twitter account. Her claims that Bethlehem was now a majority Muslim city decidedly unfriendly towards Christians were decried by Muslims and liberals, who labelled her an ‘Islamophobe’.

But her claim was supported by a video showing the muezzin, the Muslim call for prayer, coming from loudspeakers atop the Church of the Nativity, one of the holiest sites to Christianity and a UNESCO World Heritage Site. She noted that there were no women or Christians in sight, as the square in front of the church filled with praying Muslims. Goldy also noted pointed out that in the 20 years the city has been under the Palestinian Authority’s control, the Christian majority has dropped to 12 percent.

In her farewell video from the Syrian border, she pointed out another discovery that shattered the media myth of Israeli brutality: an IDF field hospital treating Syrians.

Her trip left her visibly shaken, as she related the lesson she was taking home to Canada.

“I came here believing in the two-state solution,” Goldy said. “I am at a point now where, frankly, I do not. I believe in a one-state solution. I believe the only way this little sliver of land…will remain free, is if Israelis are in control of it.”

She added a bleak warning to her message.

“I am worried that if you allow any part of the West Bank to come under Palestinian rule, which is essentially terrorist rule, let alone Hamas control, It’s gonna look like that,” Goldy said, pointing towards Syria.

Israeli Yoni Barak posted the video on his Facebook page, writing, “It is important that voices like this are heard, especially the media outside of Israel, which seek to destroy the legitimacy of Israel.”