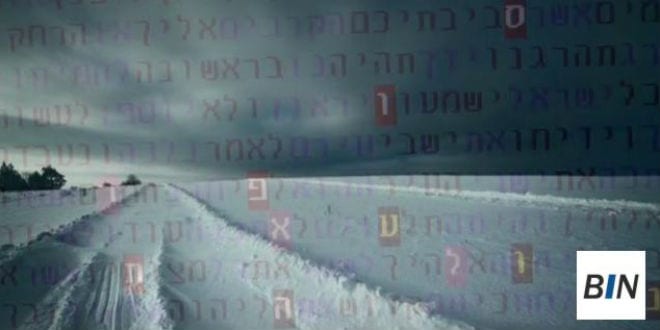 A noted Bible Codes expert has just discovered a clear message connecting the intense winter storm Stella with rumors that the American government will pressure Israel in negotiations with the Palestinians. The message appears in startling detail in the Book of Deuteronomy with an additional warning for the Jews.

In a new video released on Wednesday, Rabbi Matityahu Glazerson pointed out that the storm, which hit the northeastern coast of the United States with snow and flooding earlier this week, coincided with a meeting between Jason Greenblatt, US President Donald Trump’s special representative for international negotiations, and Palestinian Authority President Mahmoud Abbas.

There have been rumors in the media that the US envoy offered to freeze the building of Jewish settlements in Judea and Samaria in exchange for the Palestinians signing an agreement with Israel.

According to the Bible Code found by Rabbi Matityahu, the storm came specifically at this time to warn the United States against moves which would harm Israel.

Utilizing a special Torah codes computer program, the rabbi found the words “Sufat Stella” (Storm Stella, in Hebrew) in the Book of Deuteronomy. Along with the name of the storm, the code revealed the current Hebrew year, 5777, as well as the name of this month, Adar, proving that the storm was predicted to hit the United States at this specific point in history.

Rabbi Glazerson then found the Hebrew words for “punishment to the USA”. The words “God’s Messiah in the merit of repentance” also appeared in the same chapter using the same method. The word “threat” also appeared, while underneath, written explicitly and not in code, was “to God’s nation”. Under that verse were the words, “In order that they should learn to fear me and keep my commandments”.

Rabbi Glazerson noted that moves to force Israel to accept concessions in negotiations with the Palestinians have been accompanied by natural disaster at least fourteen times in the past, including the destruction of President George Bush’s home by a hurricane after he asked Israel to relinquish land to the Palestinians in 1991 and Hurricane Katrina in 2005, which came two weeks after the destruction of Jewish communities in Gaza.

In addition to the clear warning to the United States, the rabbi notes that there is also a message to the Jews.

“God gave the land to Israel on the condition we keep his covenant, which includes the Torah commandments,” the rabbi said. “More and more, there are segments of Israel that are not keeping the commandments.”

“Even those who compare Trump to Cyrus, the non-Jewish king who helped the Jews return to Israel and build the Temple, have to remember that in the end, even Cyrus messed up,” the rabbi said. “As in the times of Cyrus, there is great potential for success, but when some Jews refuse to keep the mitzvot (Torah commandments) like the Sabbath, there is nothing to be done.”