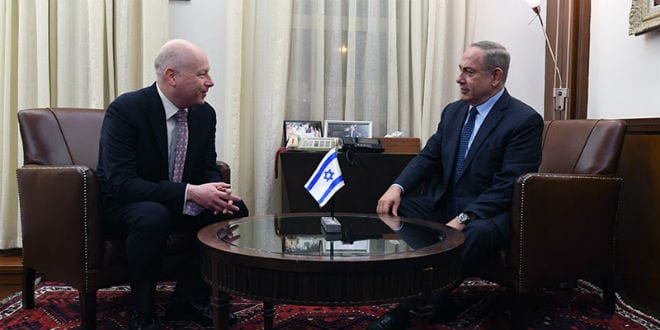 They reaffirmed the joint commitment of both Israel and the United States to advance a genuine and lasting peace between Israel and the Palestinians that strengthens the security of Israel and enhances stability in the region.

The prime minister told Greenblatt, who is an Orthodox Jew, that he believes under President Trump’s leadership, it is possible to advance peace between Israel and all its neighbors, including the Palestinians, and he looks forward to working closely with President Trump to achieve that goal.

Greenblatt reaffirmed President Trump’s commitment to Israel’s security and to the effort to help Israelis and Palestinians achieve a lasting peace through direct negotiations.

The two also continued discussions relating to settlement construction in the hope of working out an approach that is consistent with the goal of advancing peace and security. The subject has been a source of some ambiguity, as the two governments have yet to work out a policy which satisfies both.

Prior to his White House role, Greenblatt worked as a real estate lawyer with Trump over the course of the last 20 years. He also advised Trump on Israel during last year’s election campaign.

The stated purpose of Greenblatt’s trip is to jumpstart negotiations between Israel and the PA, and to explore new strategies for advancing Middle East peace.