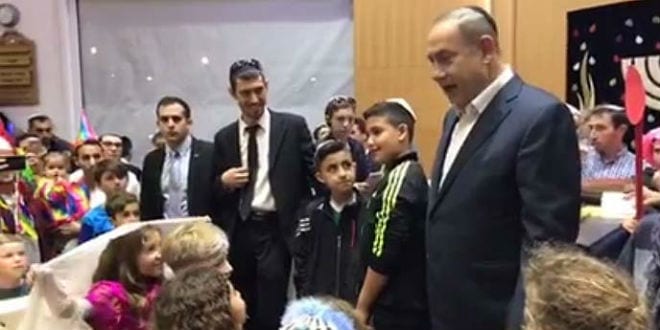 At a Megillah reading – the reading of the Book of Esther in celebration of Purim – in his local synagogue in Caesarea, Prime Minister Benjamin Netanyahu asked a group of first and second graders in their Purim costumes what the holiday is about, and posted the video of the exchange on his Facebook page.

“What do we celebrate on Purim?” the prime minister inquired, adding, “What did they want to do to us back then?”

“They wanted to kill us,” the children finally roared, after some hesitation.

“Where did they want to kill us?” Netanyahu asked.

“And did they succeed?” he asked.

“No!” the children informed him in a joyous group.

“The opposite happened!” one learned child cited the essence of the Purim message.

“The opposite happened!” the PM repeated, quite thrilled. “Today, too, they’re trying, in Persia,” he proceeded, to great applause, this time from the grownups, “and today they’re also not going to succeed!”

Ancient Persia is located in modern-day Iran, an enemy of Israel which has vowed, like the leaders of ancient Shushan, to wipe out the Jewish race. However, Netanyahu reassured the gathering, there is as much chance of that happening as evil Haman had of killing the Jews in the Purim story.