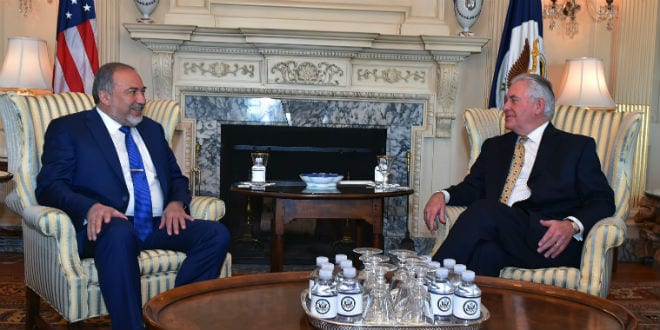 Defense Minister Avigdor Liberman said Thursday that the Trump administration is a “true friend” of Israel, and said administration officials understand the complicated nature of the Middle East and are sympathetic to the security challenges that Israel faces. But he added a warning to coalition partners from the Jewish Home party that unilateral moves in Judea and Samaria could destabilize administration support.

“Allies must coordinate their moves, not surprise one another,” Liberman told Army Radio. “After two days of meetings, I can say absolutely that we understand one another and there is room for us to move forward

“But we must find the golden path [of how to work together], not to make unilateral moves. I am confident that we can find a formula regarding building in Judea and Samaria that would be acceptable both to the settlers and to the Americans. It won’t take a day or two, but we will continue to talk,” Liberman said.

In a statement, Liberman’s office said the defense minister’s meetings with senior US officials, including Vice President Mike Pence and Secretary of State Rex Tillerson have covered a range of issues, including Syria, Lebanon, Iran’s influence on the Middle East and the United States’ relationship with the United Nations Human Rights Council and the United Nations Relief and Works Agency for Palestine Refugees in the Near East (UNRWA).

Liberman said the international bodies spend so much of their energies denouncing Israel that they are unable to fulfill their mandates to oversee human rights in countries like North Korea and Iran, or the ongoing mass slaughter in Syria.

Speaking about Jewish communities in Judea and Samaria, Liberman urged Tillerson to reject claims that Israeli settlements are an obstacle to peace, noting that the issue did not prevent Egypt and Jordan from signing peace agreements with Israel. “Even when Israel evicted residents from 21 thriving communities in Gaza, the move didn’t bring about peace, but rather rocket fire at Israel.

“I’m sorry to say that there are elements in the international community that use the settlement issue as an excuse to incite against Israel, despite the fact that incitement and terrorism aren’t coming from Israel or the settlements, but rather from the Palestinian side,” the statement said.

On the whole, Liberman stressed the strength of the Trump administration’s support for Israel and praised the Americans for Washington’s security collaboration.

“There are two elements to Israel’s security doctrine: One, the strength and spirit of the IDF. Second, coordination with the American government. From our perspective, that means transparency, openness and coordination. Anything else would harm Israel’s security,” Liberman said.