Defense Minister to VP Pence: “We Expect to See US Embassy in Jerusalem Soon”

Home » Defense Minister to VP Pence: “We Expect to See US Embassy in Jerusalem Soon” 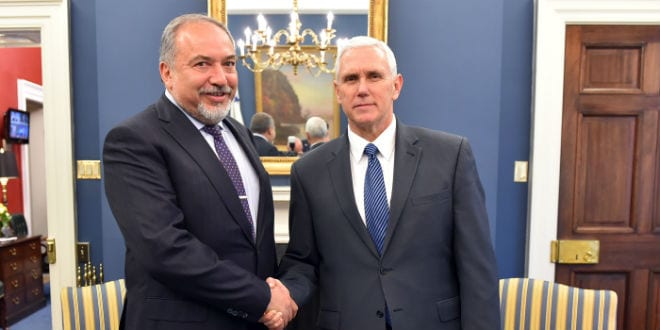 The comment came on the heels of a factfinding mission by two Republican senators to Jerusalem last weekend. The members of the House Subcommittee on National Security affirmed during the trip, which included scouting locations for the embassy, that President Donald Trump would not veto the Jerusalem Embassy Act when it comes up for review again in May.

Liberman and Pence met at the White House during Liberman’s short visit to Washington and discussed issues affecting Israel, the US, the Middle East and the American Jewish community, including the recent rise of anti-Semitism and the threat of Iran. While the embassy was mentioned, it was not the main focus of the meeting.

Liberman thanked Pence for the vice president’s strong condemnation of a wave of anti-Semitic incidents in the US, noting appreciation for Pence’s personal visit to a Jewish cemetery in St. Louis that had been vandalized.

“The fact that you helped repair a vandalized Jewish cemetery proves more than anything else that the US has zero patience for anti-Semitism,” Liberman said, adding the generous act sent a message that “Jews are an important and integral part of the American nation.”

The two talked over Iran’s recent missile tests, which had also been a subject of conversation between their chiefs, Prime Minister Benjamin Netanyahu and President Trump, during a Monday night phone call.

The tests, said Liberman, are “another sign that we cannot rely on any agreements with Tehran” such as the nuclear deal signed with Iran under the Obama administration.

“Israel is happy to see that US President Donald Trump understands the great danger of the Ayatollah, and Israel’s need to fight them effectively,” he stated.

Mike Pence Tweeted that he was “honored” to host the defense minister, proclaiming, “Our commitment to Israel’s security is unbreakable.”

Honored to host Israeli Defense Minister Lieberman in the West Wing today. Our commitment to Israel’s security is unbreakable. pic.twitter.com/PuhF9jhA7H

Following the meeting, Liberman said, “We have true friends in the White House.

“The Americans, led by Donald Trump, are Israel’s true partners in dealing with the various challenges facing us, among them the Iran issue.”