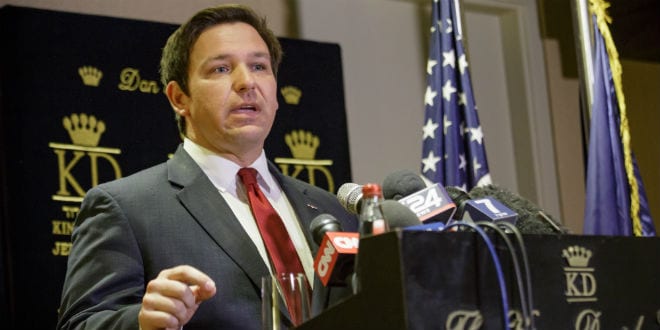 President Trump would not renew the waiver that enables the President to postpone implementing the Congressional decision to relocate the US embassy to Jerusalem, said Rep. Ron DeSantis (R-Florida), Chairman of the House Subcommittee on National Security, on Sunday. He is heading the committee’s tour to Israel to investigate moving the embassy.

Speaking as a press briefing at Jerusalem’s King David Hotel, he said that he did not think President Trump would sign the waiver, which is due for renewal in May.

“May will be close to the 50th anniversary of the liberation of Jerusalem, and I expect President Trump will let the waiver expire.”

Ever since Congress enacted the Jerusalem Embassy Act of 1995, the president has the right, under section 7, to sign a semi-annual national security waiver that enables him to postpone implementing the decision, citing national security interests. So far, all the presidents (Clinton, Bush, and Obama) who have held office since the measure was passed have consistently postponed relocating the embassy by renewing the waiver every six months.

Asked by TPS as to whether the president might link the relocation to progress on a regional peace agreement, he said that he did not think there was a link. He did, however, imply that the president could let the waiver lapse, and still slow-track implementation citing technical issues, if he decided he wanted to link the relocation to other regional developments. He then went on to say that “the president has a prerogative to determine implementation scheduling, based on overall policy priorities, if he believes it would help the US achieve such an important aim as a regional agreement between the Arab states, Israel and the Palestinians.”

He said that the delegation had visited two possible sites for locating the embassy, the current American Consulates at Agron Street in the center of the city, and east Talpiot. He said it seemed that the quickest solution would be to house the embassy at Agron Street, at least temporarily.

Finding a suitable site on which to erect a new embassy building in Jerusalem, and then building it, could take years.

Regarding the 2002 Jerusalem Birthplace Act, he said Congress would approach Secretary of State Tillerson to have the president issue an executive order that would enable consulate staff to register Americans born in Jerusalem as residents of Israel, which they currently are not.

Asked about Arab reaction to relocating the embassy, he said that while the US had received warnings and threats that such a step could ignite violence, this administration believed “the best way to deal with threats is decisiveness, not appeasement”.

Asked by TPS whether the Foreign Affairs Committee is interested in examining alternatives to the moribund two state solution, he said that it was. “There is a growing understanding in the administration, Congress and among the American public at large that the two state solution is, if not dead, mired in deep mud, and not going anywhere anytime soon”. He said there is a genuine concern that if a Palestinian state were to be established at this time, it would become a “Terrorstan”. “That’s the last thing anyone needs or wants.” Arab leaders have been discreetly voicing similar sentiments.

He ended by saying that America should not be expected to be “an honest broker”. “We are not impartial; we, the American government and public, overwhelmingly support Israel, which is one of our loyalist allies, and the world needs to come to terms with that. Israel is a key ally, and you don’t browbeat your allies, you work with them to help them figure out where they want to go and how best to get there.”