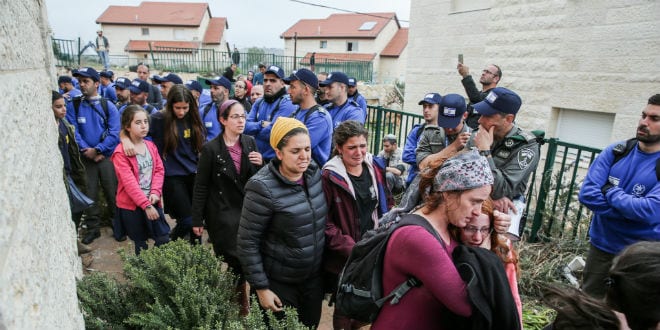 Contrary to previous expectations, the protests over the Ofra evictions have descended into violence. Police have arrested two right wing activists who attacked police officers people implementing the Supreme Court’s eviction order. So far eight police officers have been inured by rioting protesters, who erected barricades of burning tires, and blocked Road 60, the main Hebron-Jerusalem Shechem (Nablus) highway. Four of the injured officers were hospitalized, the others have returned to active duty after receiving appropriate first aid at the scene.

The level of violence has not however, reached the level experienced during last month’s Amona demolition. For the most part interactions between settlement supporters and security forces have been tense but non-violent. Adult leaders of the Ofra community and the wider settlement movement were on hand to ensure that there would be no repeat of the violent clashes that marred the previous encounter. Chananel Kfir, a resident of the condemned homes, accused police of spreading rumors that there was acid inside the Kfir home in order to justify violence when clearing the home, but said there was no basis to the rumor and pledged to resist the evacuation passively.

Like in the Amona example, security forces allowed hundreds of teenagers to penetrate the nine homes slated for demolition in Ofra after beginning preparations to begin carrying out a Court order to remove the families from their homes. But residents of the homes took care to ensure that minors were not allowed to steer the demonstrations in a direction of violence by ensuring that the protests and interaction with security forces were guided by adults.

As a result, the day was marked largely by singing, as yeshiva students bombarded eviction forces with spontaneous renditions of religious songs about redemption, the Jewish connection to the Land of Israel, selections from the Book of Psalms and the national anthem, Hatikva.

In reaction to the evictions, the National Union faction of the Jewish Home political party said “After the demolition of Amona and now of more homes in Ofra, this is the time for renewed building for the residents of Amona, Ofra and all the communities in Judea and Samaria. It is unbelievable that the State of Israel is destroying homes in a community that the State itself established, without any individual claiming that the land belongs to him or her. The High Court of Justice should protect residents and put an end to the lie of ‘privately-owned land’.

“The government has the ability to turn this train around and to start extensive building all over Judea and Samaria,” the faction said.