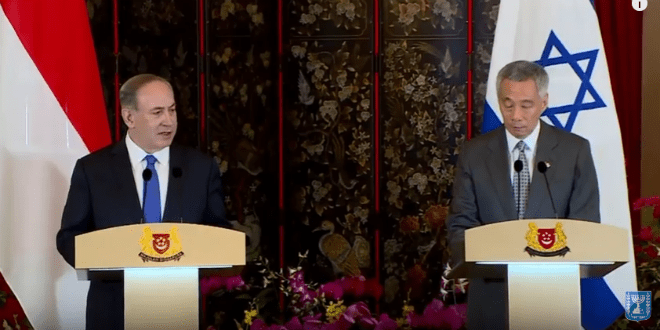 Last November settlement leaders celebrated the victory of Donald Trump over Hilary Clinton for president, expecting the departure of former President Barack Obama from the White House to usher in an unlimited period of Israeli building around Judea and Samaria. More recently, Prime Minister Benjamin Netanyahu looked more relaxed and confident last week following his meeting with Trump at the White House than at any time in recent years.

But whereas in Washington the two leaders opened a door to “new ideas” to solving the Israel-Palestinian conflict apart from a two-state solution, the prime minister received a jolt back to reality Monday when the prime minister of Singapore, Lee Hsien Loong, said in no uncertain terms that his country is committed to the traditional model for Middle East peace building.

“I know it is hard, but it is the only way to achieve peace and stability,” Lee said. “We support the two-state solution.”

In a joint press conference, Netanyahu avoided the issue, instead praising the people of Singapore, saying the island city-state illustrates the “power of people, the power of ideas, the power of the potential or rather of talent unleashed, and adding that the two countries share many things in common.

“We’re [both] small nations that have become in many areas global powers… We live in a technological age. The future belongs to those who innovate. Israel and Singapore are innovation nations, and together we can bring more prosperity, more hope for our peoples and I think for beyond our peoples, for the neighborhoods in which we live. We value the diversity in our societies, we value the pluralism in our societies, and we have much to learn from each other,” Netanyahu said.

Regardless of technology and business ties, however, the settlement issue and two-state model will continue to dog Netanyahu as he continues on to Australia later in the week. The Australian government and local Jewish community have long been strong supporters of Israel on the international stage, but have also criticized Israel over the settlement issue in the past. Last December, Prime Minister Malcolm Turnbull condemned UN Security Council Resolution 2334 as “one-sided” and Foreign Minister Julie Bishop said she would have vetoed the resolution.

But others suggest that despite Australia’s diplomatic support, the issue will come up during talks between Turnbull and Netanyahu, and especially when the Israeli leader meets with Opposition Leader Bill Shorten (Labour Party). Both leaders, and their parties, are committed supporters of Israel but also view two-states-for-two-nations as the preferable model for Middle East peace building. Further complicating matters for Netanyahu, a significant minority of the Labour Party views Israel as the main culprit for ongoing Israel-Palestinian tensions.

Further complicating matters for Netanyahu, the National Union faction of Naftali Bennett’s Jewish Home party said Monday that Prime Minister Netanyahu would be “judged by his actions” regarding building for Israelis in Judea and Samaria, a warning that the settlement movement will hold the prime minister to his commitment to provide alternative housing for Amona evictees by building the first new Jewish community in Judea and Samaria in more than two decades.

“The joint committee [between the United States and Israel regarding settlement building] is important, but the decisions of the Israeli government are much more important. The days of mere talking are over. After eight years of a building freeze, the time has come to complete the building of thousands of housing units in Judea and Samaria,” said the National Union in a statement Monday.