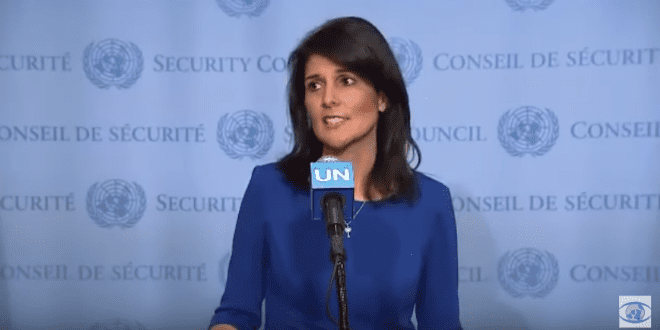 After attending her first monthly Security Council meeting, new US Ambassador to the UN Nikki Haley told members of the press that the United States would no longer “turn a blind eye” to the blatant anti-Israel bias at the international organization.

“The first thing I want to do is talk about what we just saw in there,” she began before saying that she had found the regular meeting on Middle East issues “a bit strange.”

“The Security Council is supposed to discuss how to maintain international peace and security,” Haley noted, yet the meeting had not touched on even one of the most pressing issues in the region.

“No, instead, the meeting focused on criticizing Israel, the one true democracy in the Middle East.

“I am new around here, but I understand that’s how the Council has operated, month after month, for decades,” she added.

The Trump appointee then declared, in no uncertain terms, that the US would no longer allow anti-Israel bias to go unchallenged.

Haley referenced the anti-Israel Resolution 2334, passed in December after former President Obama declined to veto the measure, which lashed Israel’s Jewish communities in Judea and Samaria and dealt a severe blow to Israel’s standing at the UN.

“We will never repeat the terrible mistake of Resolution 2334 and allow one-sided Security Council resolutions to condemn Israel,” she vowed.

Haley slammed the United Nations for inhibiting efforts towards peace agreements by favoring Palestinians. “The outrageously biased resolutions from the Security Council and the General Assembly only make peace harder to attain by discouraging one of the parties from going to the negotiating table,” she accused.

“The double standards are breathtaking,” she continued, highlighting the recent refusal of the UN to condemn a terror attack in Israel. “The Security Council would not hesitate to condemn an attack like that in any other country. But not for Israel. The statement was blocked. And that’s downright shameful.”

She ended her statement on a positive note by pointing out that Israel’s place in the world is improving as more and more countries recognize the Jewish state’s contributions in innovation, technology, and regional stability.

Rather than Israel’s behavior, she reiterated, “It is the UN’s anti-Israel bias that is long overdue for change.

“The United States will not hesitate to speak out against these biases in defense of our friend and ally, Israel,” she concluded firmly.