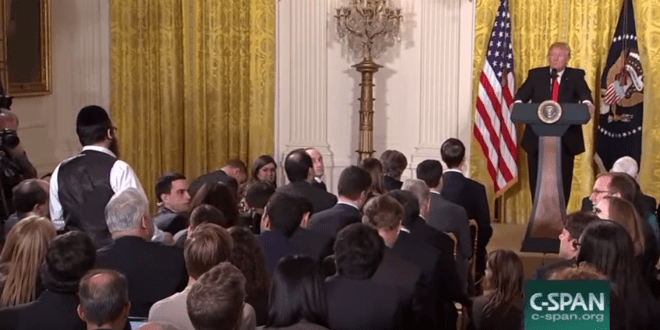 During a contentious press conference Thursday at the White House, President Donald Trump told an Orthodox Jewish reporter to “sit down” and accused him of “dishonesty” after the reporter asked a question regarding the uptick in anti-Semitism across America.

The reporter, Jake Turx, from Ami Magazine, responded to Trump’s call for a “friendly” question by standing and saying, “I’m friendly.” Turx started his question by saying that nobody in his community has “accused you or anyone on your staff of being anti-Semitic.”

“We understand that you have Jewish grandchildren, you are their zayde,” Turx said, using the Yiddish term for grandfather, which Trump appeared to understand.

“What we are concerned about and what we haven’t really heard being addressed is an uptick in anti-Semitism and how the government is planning to take care of it,” Turx proceeded to ask, referring to bomb threats at JCCs and other incidents plaguing the Jewish community in recent weeks.

Trump interrupted Turx and accused the reporter of being dishonest and insulting.

“See, he said he was going to ask a very simple, easy question, and it’s not….Not a simple question. Not a fair question. Okay, sit down. I understand the rest of your question,” Trump said, before calling himself “the least anti-Semitic person that you have ever seen in your entire life” and also the “least racist person.”

When Turx attempted to interrupt the president, Trump told him to be quiet.

Trump went on to cite how Israeli Prime Minister Benjamin Netanyahu told the president a day earlier that he has been a strong supporter of the Jewish people.

“You should take that instead of getting up and asking a very insulting question,” he said.

Some Jewish groups expressed concern over Trump’s exchange with the reporter.

“It is honestly mind-boggling why President Trump prefers to shout down a reporter or brush this off as a political distraction,” said Jonathan Greenblatt, national director of the Anti-Defamation League.

American Jewish Committee CEO David Harris, while acknowledging that Trump has been a “long-time friend” of many Jewish people, called the events “both worrisome and puzzling.”

“We need the help of the government to combat this cancer, which violates every value for which our nation stands. That’s why the questions are being asked at press conferences, and not in order to cast aspersions on your administration,” Harris said.

Turx himself spoke up in defense of the president the day following the press conference, telling Fox News, “It’s very unfair what’s been done to him and I understand why he’s so defensive. I’m with him when it comes to being outraged about him being charged with this anti-Semitism.”

In fact, he said, he found Trump’s response “hopeful.”

The reporter praised Trump for “an unprecedented amount of outreach with the Orthodox Jewish community.”

“We understand why this is so hurtful for him, to see himself being called an anti-Semite.”