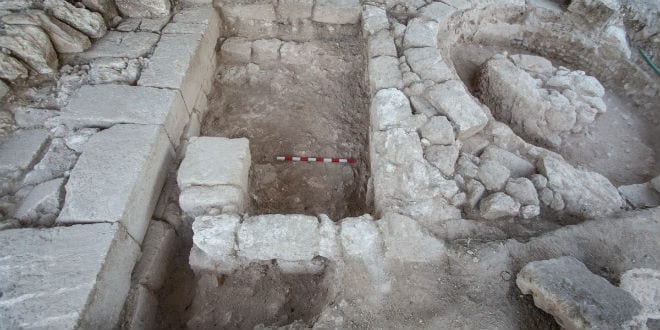 A Haifa University archaeological dig at Beit Shearim (“House of Gates” in Hebrew) has uncovered a Roman wall and gate that has caused researchers to reconsider previously held notions regarding  second and third century CE Jewish life in Judea.

Beit Shearim, located near present day Qiryat Tivon, where the foothills of the Lower Galilee begin to rise up above  the Jezreel and Zvulun Vallies,  was the seat of the Sanhedrin in the second century CE, and where its illustrious head, Rabbi Yehuda Hanasi, lived and held court.

The find has researchers intrigued, especially the name “The Gates” inscribed above the gate.  “Until now we have never discovered any evidence of a relatively small settlement of this type being surrounded by a wall during this period”, said Dr. Adi Erlich-Zinman, who is heading the excavation.

“However we are also reasonably sure that the inscription does not refer to the gate, since there is no evidence of any Roman wall in the region having the words ‘the gate’ written above the gate…This means we have to rethink things.”

The finds at the site include the threshold of a large gate with a tower built of large dressed stones.

Beit Shearim, in the Lower Galilee, was a Jewish settlement in the Roman period that culminated in second and third centuries CE. Despite the fact that it was the Seat of the Sanhedrin, it was a relatively small settlement, reflecting the condition of the Jewish community in the Land of Israel  in that period, shortly after the defeat of the disastrous Bar Kochba rebellion.

“Even much larger Jewish towns like Jotapata (Yodfat), which had walls, did not have the kind of ornate gate we see here,” said  Dr. Erlich.

According to Dr. Erlich, one of the more likely explanations was that Beit Shearim served not just as the Seat of the Sanhedrin, but as the Seat of the area’s tax collector. This means the town despite its small size had what we would call today a high socio-economic ranking, attracting both wealthy Roman and Jewish residents. This would explain why it was fortified.

The number of other large public buildings discovered at the site give credence to the theory that the town served as the regional tax collection base during the reign of Queen Berenice.