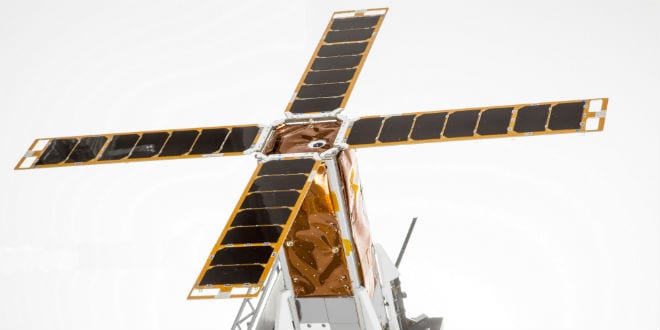 Israeli academia’s first research nanosatellite was launched into space on Wednesday, February 15. Ben Gurion University’s BGUSAT nanosatellite was among the record 104 nanosatellites from five countries, which were launched on the Polar Satellite Launch Vehicle from the Satish Dhawan launching pad in India today. The Israeli nanosatellite will study climate change and scientific phenomena from space.

The BGUSAT, which is a little bit larger than a milk carton, was developed by Ben Gurion University (BGU) in collaboration with the Israel Aerospace Industries (IAI) and the Ministry of Science, Technology and Space. Weighing just five kilograms, the BGUSAT is outfitted with innovative new cameras that can detect climate phenomena and a guidance system that lets the operators choose the areas to shoot and research through a dedicated ground station at BGU.

It is the first time that any Israeli university will have access to data from an Israeli nanosatellite for research purposes.

“This is the first time that Israeli researchers will have the opportunity to receive information directly from a completely blue and white satellite, without having to go through other countries or research agencies,” said Avi Belsberger, director of the Israel Space Agency.

The Israel Space Agency in the Science Ministry, IAI and BGU launched the nanosatellite project five years ago while actual construction of the satellite began two years ago at IAI’s space division. “This is another step in advancing cooperation between the government, industry and academia in order to promote the Israeli space industry,” said Science Minister Ofir Akunis.

“Only such a collaboration with government backing will preserve the Israeli space industry’s global standing, and will promote research, create new jobs, all while safeguarding the essential interests of Israel,” Akunis further commented in a statement.

Satellite engineering is a constant balance between conservative and innovative thinking. Nanosatellites, which are much cheaper than large satellites, offer a larger arena for space innovation. For BGUSAT, students and researchers at Ben Gurion University were encouraged to think of new ways to build the nanosatellite and which systems to install, while integrating knowledge from a variety of fields such as software engineering, electrical engineering, planetary sciences, industrial engineering and management and more.

Following the satellite’s launch, the Israel Space Agency has allocated an additional NIS 1 million to fund future research based on the data to be received from the satellite and sent out a call for proposals. BGU and TAU have already submitted a joint proposal to study Earth’s airglow layer.

“Nanosatellites enable space engineering and space research at costs that are affordable for academia. The reduced costs allow academia to assume a much more active role in the field taking advantage of the innovation and initiative of researchers and students,” said Prof. Dan Blumberg, BGU’s VP and Dean for R&D.

Through the BGUSAT cameras, researchers will be able to track atmospheric gases like CO2 in order to understand climate change, to examine changes in ground moisture that could be an indicator of desertification and affect agricultural development or to monitor plant development in different regions.