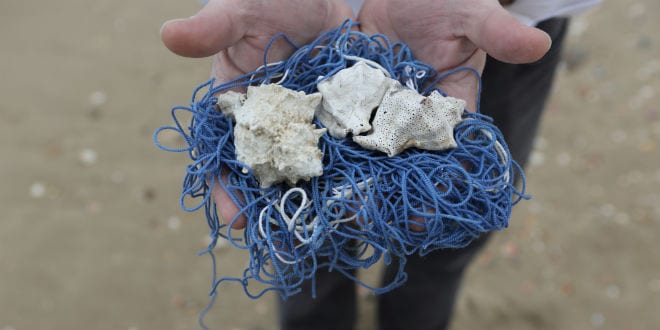 Murex trunculus, a rock snail shell, believed to have been used in the process of making techelet, the blue dye for tzitzit (fringes) on prayer shawls, was recently discovered by the Singer family from Jerusalem, who participated in the Temple Mount Sifting Project (TMSP).

The sifting project, under the auspices of Bar-Ilan University, began in 1999 after the Northern Branch of the Islamic Movement conducted illegal renovations on the Temple Mount and disposed some 9,000 tons of dirt mixed with invaluable archaeological artifacts. This illegal bulldozing destroyed innumerable artifacts which were dumped as garbage in the nearby Kidron Valley.

Archaeologists Dr. Gabriel Barkay and Zachi Dvira retrieved the matter from the dump, and in 2004 started sifting through it. Their initiative became TMSP with the goal of rescuing ancient artifacts and conducting research to enhance our understanding of the archaeology and history of the Temple Mount. Over the past 12 years, TMSP has grown into a crowdsifting project of international significance, with help from some 200,000 volunteers of all ages, and thousands of valuable finds have been discovered, unearthing the discarded history of the Temple Mount.

Making techelet requires special skills as well as a lot of snails, according to the TMSP blog. Dye can be collected by crushing the snails, or by laboriously milking the snails and collecting the excretion. 12,000 snails might yield 1.4 grams of dye, which is only enough to color the trim of a single garment.

Because of this, this Royal Blue or Royal Purple dye was very expensive, making it an almost exclusive sign of kingship and royalty. Interestingly, the color of this dye becomes more vibrant when left in the sun, and it is possible that different versions of the color can be made by making the dye in the sun or in the shade.

What was the murex shell doing on the Temple Mount? When one finds a shell in a place as remote from the sea as Jerusalem, it means it was used by humans for some purpose. So far, more than 20 murex trunculus shells have been discovered in the sifting, and it could be surmised that there was a workshop for dye production on the Temple Mount, and these shells were used to create the dye for fabrics used in the Temple. The TMSP blog speculates the dye production was being kept on site for purity reasons.

TMSP has not yet dated these shells, waiting until they discover evidence linking them to another datable artifact. Their blog notes that carbon dating costs around $400 per test, and in order to reach statistical significance they would need to test around 20 shells, so, before they spend the money, they want to gather more scientific evidence.