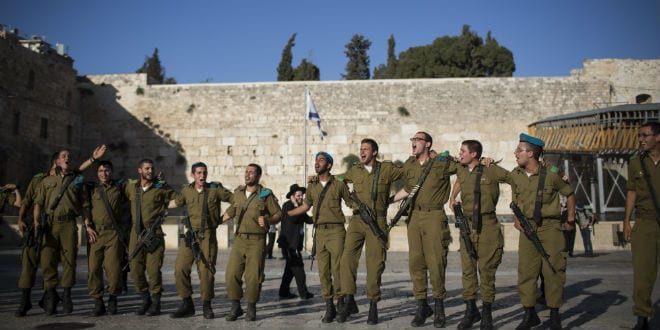 When people think of Israel’s army, the first thing that comes to their mind might not be the importance of providing cultural activities and tours throughout the Holy Land. However, these activities have been found not only to be crucial to the well-being of soldiers but also to the future of Israel.

“We were shocked and saddened to learn that thousands of Israeli soldiers have never been to an Israeli or Jewish cultural event,” shared Brigadier General Yehiel Gozal, CEO of Yahad-United for Israel’s Soldiers, the only Israeli government and Ministry of Defense sanctioned organization to fill in the financial and social gaps of the Israel Defense Force (IDF) budget. “This means that they have never been in a theatre, heard a live concert, or even visited the holy city of Jerusalem. Many have never gone further than the local park in the neighborhood in which they grew up.”

Gozal pointed out the seriousness of this matter in regards to the security of the State of Israel. He noted that one’s motivation increases exponentially when they have a deep relationship and love for what they are protecting. “Unfortunately, many soldiers have never been educated about the history and holiness of Jerusalem, for example,” he said. “When they experience the beauty, antiquity and modernity of the city with their own eyes, their connection to the land increases and they become better soldiers.”

There are several factors which have caused this lack of Israeli cultural and history. With 1.7 million citizens living below the poverty line, many families simply cannot afford to go to a show or on a trip. Additionally, there are approximately 6,000 lone soldiers in the IDF. They come from all over the world to protect the Holy Land. Yet, many have not had the wherewithal to become culturally oriented to the country. For others, cultural experiences and exploring the land has simply never been a priority.

“We have found that these cultural days have an enormously positive impact on soldiers,” continued Gozal to Breaking Israel News. “Along with the activities and tours, soldiers are also educated about various societies and lifestyles of people who are in their platoons. This builds an important camaraderie.”

Israel’s army is made of of Jews, Christians, Druze, and Bedouins. IDF soldiers protect every person in the land, including Arabs. Therefore, it is of the utmost importance that soldiers develop a knowledge and appreciation for other cultures in order to best serve in the army. Trips include not only important Jewish sites but Christian and Muslim sites as well.

In addition to the education and cohesion the cultural days develop, the importance of taking a break from the army routine and training allows the soldiers some much needed relaxation and enjoyment. Additionally, Gozal pointed out, the future of cultural in Israel depends on the younger generation appreciating the importance of the arts and history of the Holy Land.

“Cultural days are at least as important as the food vouchers Yahad distributes to poor, lone and needy soldiers,” said Gozal.  “These days nurture the spirit and morale of soldiers. They connect to their heritage, the Bible and modern day Israel in ways that they never knew existed before. Being in Israel’s military is more than being a soldier. It is connecting to the Land and the ingathering of the exiles in order to form one nation.”