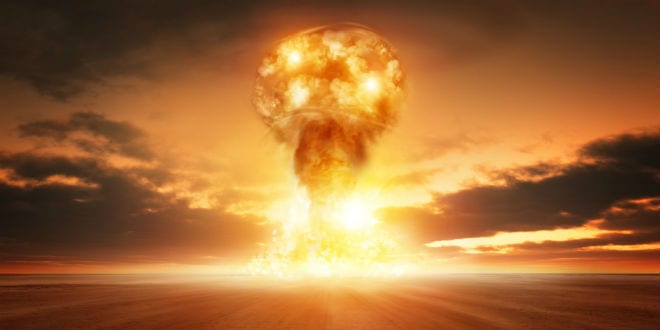 Several high-ranking Iranian officials threatened Israel and America last week, claiming they could rain down destruction on their Western enemies in an ultra-short war that conforms to a 300-year old prophecy describing the War of Gog and Magog. An end-of-days expert sees an even deeper message hidden in Iran’s bizarre eight-minute threat.

The War of Gog and Magog is described in prophecy as being an unusually short war. A tradition from the Vilna Gaon (a prominent 18th century Torah authority) teaches that the war of Gog and Magog will last 12 minutes. According to a 20th century interpretation, “A third of the world will die, a third will suffer from plague and a third will survive.”

This 18th century prophecy of a 12-minute war was surprising, as it came several hundred years before the advent of nuclear weapons. Conventional wars necessarily last much longer and such a quick war was inconceivable at the time. Such a short war, possibly a  nuclear exchange, may have been hinted at in the Bible.

At eventide behold terror; and before the morning they are not. Isaiah 17:14

The prophecy hints at a swift and all-encompassing catastrophe similar to nuclear war. The war with which Iran threatened Israel and America last week has a timetable even shorter than the one given in Isaiah.

“With the abilities and the equipment at our disposal, we will raze the Zionist regime in less than eight minutes,” threatened Ahmad Karimpour, a senior adviser to the Iranian Revolutionary Guards’ elite al-Quds Force, on Thursday.

The US army’s fifth fleet are “all within the range of Iran’s missile systems and they will be razed to the ground if the enemy makes a mistake,” Zonour said. Doubling down on Karimpour’s threat, he added, “And only 7 minutes are needed for the Iranian missile to hit Tel Aviv.”

This intercontinental saber-rattling is a return to Cold War nuclear threats. Advanced technology has raised the stakes, while global politics has brought more nuclear-armed players to the table, making the balance of power unstable and unpredictable. More so than ever before, the stage is set for the prophesied 12-minute war of Gog and Magog.

Rabbi Pinchas Winston, a prolific author and End of Days scholar, believes that despite Iranian technology and their eight minute threat, the prophecy of a 12-minute Gog and Magog war clearly contains an additional hidden element.

“I don’t see how a war, even one fought with nuclear missiles, could be completed in 12 minutes in a natural manner,” Rabbi Winston said to Breaking Israel News. “For the 12-minute prophecy to come about, something entirely unforeseen has to happen.”

The rabbi discussed several possibilities for an ultra-short war.

“One possible scenario relates to Tehran being a major earthquake risk, sitting on several major fault lines,” Rabbi Winston said. “Another possible ultra-short war scenario is that, in a sense, the war has already been fought already. Israel has a secret plan in place, which would explain why they are fearlessly taunting Iran. Everything is in place for Israel to win. Another possibility, of course, is a major miracle.”

Rabbi Winston explained that the concept of sudden revelation is integral to the End of Days.

“Everything God does, is under our noses but we never see it until God reveals it,” Rabbi Winston stated. “The paradigm for geula (redemption) is Joseph, who in one moment changed everything for his brothers. Joseph was standing right in front of his brothers, but they couldn’t physically see him, but more importantly, they couldn’t conceptualize that their long-lost brother could be viceroy.

“That is what the final battle of Gog and Magg will be, and why it will necessarily be unnaturally short,” the rabbi said. “The main point will not be the battle. The main point will be people waking up to what God has in mind, and this will be brought about by God revealing the battle in a totally unique and unexpected manner.”