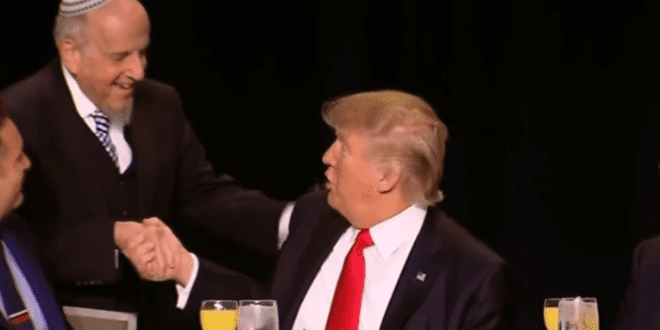 Last Thursday, President Donald Trump attended the National Prayer Breakfast which is traditionally held every year in Washington on the first Thursday in February. The event, attended by the President and political and economic elite of the USA, is designed as a forum for the political, social, and business elite to assemble and build relationships.

In the course of the event, cameras captured the President conversing warmly with Rabbi Haskel Lookstein, Rabbi Emeritus of Congregation Kehilath Jerushun in Manhattan’s Upper East Side, and more famous as Trump’s daughter Ivanka and son-in-law Jared Kushner’s rabbi. During their brief conversation, Trump was seen congratulating the rabbi and telling him, you’re doing a “Good job.”

Lookstein’s name rose to the headlines a half year ago after the appeal submitted by ITIM (an organization dedicated to helping Jews navigate the religious establishment in Israel) to the Supreme Rabbinical Court of Law in Israel to recognize conversions that Lookstein had conducted was rejected. This followed his rise to fame as the rabbi who supervised the conversion of Ivanka Trump.

More recently, the Rabbinate changed their tactics and announced that it has formed a committee to establish new criterion for recognizing rabbis in the Diaspora in order to pave the path to approve Rabbi Lookstein’s conversions. Their announcement came subsequent to a Jewish Week article published after Trump’s election which publicized his staff’s personal appeal to the Israeli government to recognize his daughter’s Judaism.

Rabbi Seth Farber, Chairman of ITIM, said, “The meeting between Rabbi Lookstein and President Trump, and the warmth demonstrated by the President during an event attended by over 3,000 of America’s most influential personalities, attests to the error in judgment of Israel’s rabbinate when it flippantly dismissed Rabbi Lookstein’s conversions. Rabbi Lookstein is one of the leading Modern Orthodox rabbis in the United States and is held in high esteem by all of his colleagues both ultra-Orthodox and non-Orthodox.

“In anticipation of Prime Minister Netanyahu’s visit to meet the President, we sincerely hope that the rabbinate will state clearly its support for conversions performed by Rabbi Lookstein and other rabbis from North America and around the world, and follow through on their promise to issue criteria which will enable other converts to have their Judaism recognized.”