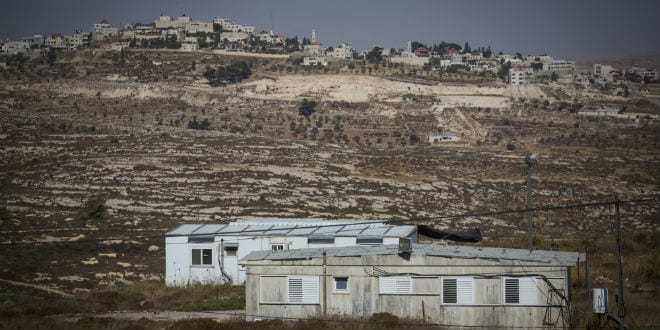 The Knesset ratified the controversial Expropriation Bill, which retroactively legalizes about 4,000 “settler outposts” located on privately owned land in Judea and Samaria, on Monday. The final vote was 60 to 52.

Prime Minister Benjamin Netanyahu was not present for the vote.

Predictably, right-wing politicians celebrated the measure. Immediately following the vote, the Jewish Home party called the vote an “historic day that signals a change in direction for the State of Israel.” In a statement headlined “the beginning of sovereignty,” the party said the new law will serve as a “message to thousands of Israeli families in Judea and Samaria that they will no longer be second-class citizens.”

Deputy Defense Minister Rabbi Eli Ben-Dahan said “the Israeli government has finally taken responsibility for Jewish settlement in Judea and Samaria. The Expropriation Law is the first step towards applying Israeli sovereignty in all of Judea and Samaria.”

Ben-Dahan’s party colleague Moti Yogev concurred, adding “something enormous happened today: The Knesset ratified the Expropriation Law… this is history, and it is a reality that the Jewish People have returned to its land.”

Yogev also blasted the High Court of Justice, calling the court a “dictatorship of a minority of elites,” and said that even if the court nixes the new law, the Knesset would continue to pass legislation to benefit the Jewish People in the Land of Israel.

“The Jewish People is both smart and wise and wants to bolster the settlement enterprise all over its land, from the Galilee to the Negev, in Judea and Samaria,” Yogev said.

Equally predictably, the Israeli left mourned the passage of the bill and pledged to challenge the law in court.

The Joint List party said in a statement that the law grants a stamp of approval to the “crimes of occupation and the theft of Palestinian land,” and stands to “execute” any chance to reach a political agreement between Israel and the Palestinians.

“Despite the fact that this anti-Israel-democratic law violates international law, the right-wing government insists on slowly carrying out its plan to annex [Judea and Samaria]. This will drag the region over a cliff into disaster and perpetuate the conflict, hatred and bloodshed in the region.

“Tonight it became clear that Netanyahu is willing to compromise the future of both Israelis and Palestinians in order to satisfy a small group of extreme settlers for the sake of his own political survival,” added the left-wing Peace Now group.

“By passing this law, Netanyahu makes theft an official Israeli policy and stains the Israeli law books. By giving a green light to settlers to build illegally on private Palestinian land, the legalization law is another step towards annexation and away from a two state solution. In light of this madness, we must act as the responsible adults and turn to the Supreme Court in order to strike down this dangerous law,” said the group in a statement.