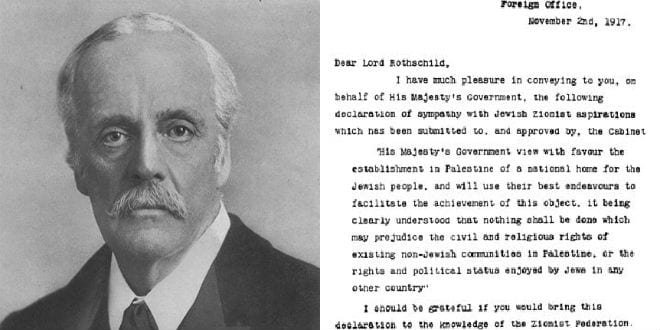 A century after the U.K. declared its support for the establishment of a national home for the Jewish people in Israel, the current Lord Balfour expressed pride in his great-grandfather’s “humanitarian act,” as Jewish leaders from around the world and some 700 Russian-speaking Jews from 18 European countries gathered in Windsor this weekend for the first-ever Limmud FSU (former Soviet Union) Europe regional conference in the U.K.

The Limmud FSU Europe conference featured a special centennial celebration of the Balfour Declaration. The declaration, dated Nov. 2, 1917, was sent from U.K. Foreign Secretary Lord Arthur James Balfour to Baron Lionel Walter Rothschild, and expressed the U.K.’s support for the establishment of a homeland for the Jewish people in Israel.

Reacting to the celebration, Arthur Balfour’s great-grandson, Lord Roderick Balfour, who had never before made a public statement about the declaration, said in a letter: “My family is very proud of the importance to Jewish people everywhere of this initiative by the British government‎ of the day. The relevance to you all here today is that the imperative for it stemmed from the appalling Russian pogroms at the turn of the 19th and 20th centuries. Thus, and this is what we are most proud of, the declaration was first and foremost a humanitarian act trying to repatriate a talented but much-persecuted people to the land of the original Judaic roots.”

Speaking at the conference about a report issued last week by the London-based Community Security Trust (CST) that anti-Semitic hate crimes are at an all-time high in the U.K., American historian Deborah Lipstadt said: “Holocaust denial is one manifestation of anti-Semitism. There are hardcore Holocaust deniers – who are easy to fight, using facts – and then there is soft-core Holocaust denial. Take, for example, the recent White House statement that failed to recognize Jewish victims of the Holocaust. These sorts of attempts to be ‘inclusive,’ as Trump spokesperson Hope Hicks put it, take the Jewish identity away from the Holocaust. This is a form of Holocaust denial.”

“The CST report is particularly disturbing because there was no single trigger event – such as Israel’s 2014 operation in Gaza – this past year,” said Jonathan Arkush, the president of the Board of Deputies of British Jews. “This increase in anti-Semitic incidents is a result of the populism surrounding Brexit – in the same way that Donald Trump’s election exposed deep-seated anti-Semitic and other hateful sentiments in America.”

“This unprecedented continental gathering brought together major Jewish leaders and the Russian-speaking Jewish communities of Europe to celebrate the Balfour Declaration, which paved the way for the formation of the modern State of Israel,” said Limmud FSU Founder Chaim Chesler and Co-Founder Sandy Cahn. “Our first extra-territorial Limmud FSU was also our first nomadic conference, convening Russian-speaking Jews from across Europe in the continent’s informal capital.”