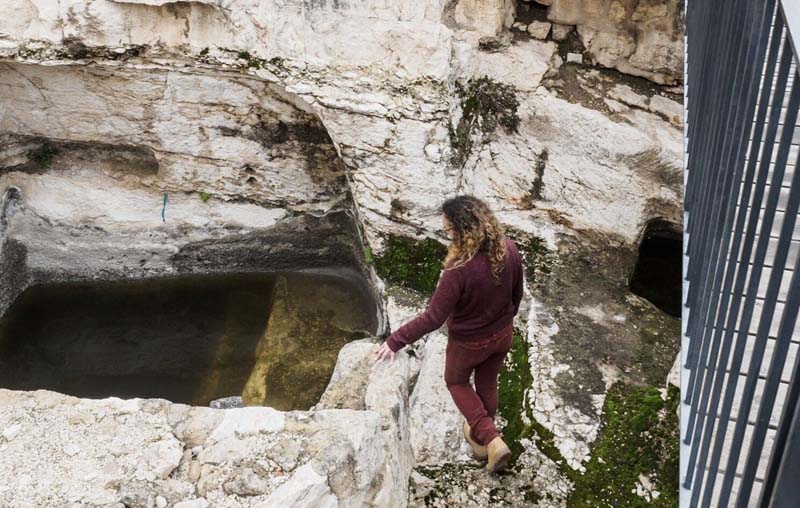 A new path running among two-thousand year old ritual baths, or mikvahs, that were used by pilgrims visiting the Temple Mount is to be inaugurated at the Ophel site of the Davidson Center Archaeological Park, in the Walls Around Jerusalem National Park.

The mikvah path, which is experiential, circular and modular, was constructed and conserved in recent years by the Israel Antiquities Authority with the help of a generous donation from Kevin Bermeister. The path has been highlighted and in that way it can be better understood within the historical and archaeological complexity of the Ophel site, which was continuously inhabited from the Iron Age to the Crusader period.

The accepted interpretation of the Biblical word “ophel” (derived from the Hebrew lehaʽapil – to ascend) is an elevated portion of the city where a king resided or an administrative center was situated, which was probably both high and concealed.

In Jerusalem, the ascent was from the south: pilgrims ascended – both physically and spiritually – from the Pool of Siloam by way of the City of the David to the Ophel and its ritual baths, and from there to the Temple Mount. At the same time, festivities and events departed to this area from the Temple Mount in the north. Thus the Ophel constituted an area of transition between the secular and the sacred and the sacred and the secular, the pinnacle of a personal, religious and national journey that took place three times a year at Passover, Shavuot and Sukkot.

Visitors to the new mikvah path will walk over bridges and stairs that “float” in between the ruins of buildings and installations, and will be accompanied by archaeological, historical and halakhic (Jewish law) explanations. In this way they will be able to learn about the characteristics of ritual baths and their role in Jewish society of the Second Temple period in general, and in this area, of the pilgrims route in particular. The route is flanked by shade stations, observation points and gathering areas.

A ritual bath is a water installation that is unique to the Jewish tradition. Its spiritual-religious purpose is to cleanse the bather of the impurity of the dead. The halakhic principles of its construction were developed in the Second Temple period, as put down in writing in the Miva’ot tractate of the Mishnah. The arrival of tens of thousands of pilgrims who were lodged in the city during the pilgrimage festivals necessitated an infrastructure capable of supplying enough water for all of them.

For hundreds of years after the destruction of the Second Temple Jews were forbidden from residing in Jerusalem, and the city’s non-Jewish inhabitants utilized the abandoned baths for their own purposes as water cisterns, storage spaces, or quarries.

The first part of the new path is the “descent,” where the visitor descends south alongside the southern Ottoman wall outside the Temple Mount, as if on a “time line,” to areas that provide an in-depth illustration of the finds, including an exhibit of stone vessels and an explanation about the purification of vessels, clothes and objects. On the way the visitor learns about the religious laws concerning the mikvah, its operation and the water cisterns.

The second part of the path is the “ascent,” where the visitor goes up alongside sights and explanations, on an experiential route, the pinnacle of which is the exciting vista of the monumental Hulda stairs and the double gate on the southern wall of the Temple Mount. A Jew who arrived at this point in antiquity would enter the sacred compound and fulfill the mitzvah (Torah commandment) of the pilgrimage.

Curator: Nirit Shalev-Khalifa; Design and Production: Ofer Kotler; Architecture: Hana Gribetz; Conservation Architect: Shahar Puni; Scientific Consultation and Writing: the late Dr. David Amit, and Dr.Yuval Baruch. The creation of the path was made possible by a donation from the Breimeister family and at the initiative of Jerusalem 5800, in memory of the late Avraham Haim Ben-Ze’ev and Leah Bat Dov Ber.