Minister Ariel: “There Will be One Country Between the River and the Sea – Israel”

Home » Minister Ariel: “There Will be One Country Between the River and the Sea – Israel” 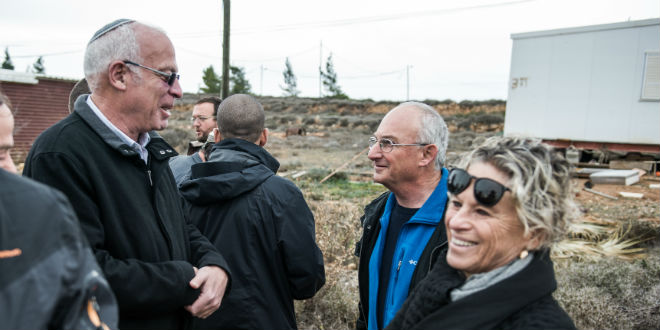 Agriculture Minister Uri Ariel rejected the possibility of a Palestinian state Thursday, saying that the settlement movement will walk away from the demolition of Amona heartened by hard numbers and a clear vision of the future.

Speaking to Israel Radio, Ariel said “when Amona was first evacuated [in 2006] there were about 250,000 Jews in Judea and Samaria. Now that number is about half a million. So things are moving in the right direction – things go up and down, but I can say conclusively that I know who the ultimate sovereign will be here: The State of Israel. There will only be one country between the river and the sea, and that’s a good thing.”

Ariel also rejected claims that protesters clashed with eviction forces at Amona Wednesday and Thursday,  saying “you can always get a photo of some people who aren’t listening,” but he stressed that “every single religious Zionist rabbi, without exception, called on people not to use violence.”

Responding to Ariel, MK Ofer Shelah (Yesh Atid) said he respects the agriculture minister for his honesty, but challenged his vision for a Jewish democracy and questioned Ariel’s commitment to the latter principle. Shelah also leveled blistering criticism at Prime Minister Benjamin Netanyahu.

“With Uri Ariel I have questions about what his vision is – are we going to be a bi-national state? But least he says clearly and honestly what he supports.

“On the other hand, the prime minister says he is in favor of a two-state solution and says he will work towards a that goal, but then talks about plans [such as building 650 new housing units in Judea and Samaria and announcing plans for the first new settlement since 1991] that will make it impossible to achieve this goal.

“So I’m left with an open question: Where, exactly, does Binyamin Netanyahu want to lead Israel?” Shelah asked.

Asked about how the Trump administration would react to the expropriation bill and to the large building project that Netanyahu announced Wednesday, Shelah said he could not comment on the new administration but cited the question as evidence that Israel has no foreign policy other than ‘whatever our rich sponsor in Washington will allow us to do.’

“Instead of asking ourselves ‘what would be the best thing for Israel,’ [Netanyhahu’s policies] amount to little more than ‘what will Washington allow us to do.’ I may have a deep disagreement with Uri Ariel over the answer to that question, but Binyamin Netanyahu says both that he wants a Palestinian state and also that he’ll take every possible step to ensure that one can never emerge,” Shelah said.

Regarding the expropriation bill, Shelah said that passing the measure would be a “huge step” towards a loss of Israel’s democratic identity and would put the country on a slippery slope towards leaving the family of law-abiding nations. He also noted that Attorney General Avichai Mandleblit and “all legal scholars of any standing” say the law would be unconstitutional and that indefensible in court. But he said it is yet another instance in which the government “refuses to tell residents of Amona the truth.”

“That’s the problem here – Israel has no leadership at the moment,” Shelah said.