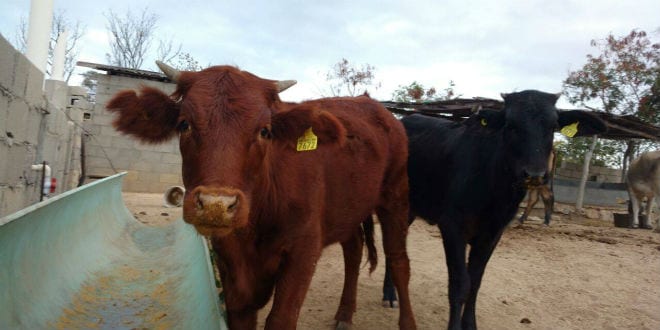 A rabbi in a remote region of Mexico he went to a dairy farm to purchase milk, and was shocked when he saw a vital element of the Third Temple right in front of his eyes: a red heifer calmly chewing its cud under the Baja sun.

“I’ve grown up with the stories, so I know how rare and valuable the red heifer is,” Rabbi Benny “Bentsion” Hershcovich told Breaking Israel News. “I’ve never seen a red heifer and I never expected to see one. My heart literally jumped when I saw it.”

The red heifer, one of the most perplexing Torah commandments, is a necessary element for purifying Jews in order to enable them to do the service in the Temple.

And a man that is clean shall gather up the ashes of the heifer, and lay them up without the camp in a clean place, and it shall be kept for the congregation of B’nei Yisrael for a water of sprinkling; it is a purification from sin. Numbers 19:9

Over the course of the approximately one thousand years the First and Second Temple stood, only nine Red Heifers were used in preparing the waters used to purify Jews. According to Jewish tradition, the tenth one will be used by the Messiah.

Rabbi Hershcovich is the emissary to Cabo San Lucas, Mexico for Chabad, a branch of Hasidic Judaism which emphasizes the role of the Messiah. He works hard to serve the spiritual needs of the small Jewish community in Baja, but adhering to the extra-stringent Chabad customs regarding the preparation of food presents a challenge in the exotic locale.

“Even though we are in this far-flung region, we decided not to compromise on any of the kosher standards we held in Brooklyn,” Rabbi Hershcovich explained to Breaking Israel News. This adherence to ritual led him to a remarkable discovery illustrating that the Third Temple is very close indeed.

Rabbi Hershcovich’s kosher stringencies require that he personally oversee the milking for making his own dairy products. While visiting a Mexican farm, the rabbi looked up from the milking and was shocked to see a distinctively colored cow wandering among the herd: one which appeared completely red, without a blemish or spot.

Rabbi Hershcovich asked the farmer about the calf. The perplexed Mexican farmer explained that it had been born several months earlier, and that while the color was odd, he considered it to be “just another cow”. The farmer had never heard of the Biblical commandment and did not understand why the rabbi was so excited.

Though familiar with the concept of the red heifer – or para adumah in Hebrew – Rabbi Hershcovich felt unqualified to determine whether this particular cow fulfilled the Torah requirements. The laws pertaining to the red heifer are complex and a tiny blemish or a hair of the wrong color can render the cow unfit.

This is the statute of the law which Hashem hath commanded, saying: Speak unto B’nei Yisrael, that they bring thee a red heifer, faultless, wherein is no blemish, and upon which never came yoke. Numbers 19:2

“Regardless of its status, just seeing something that was an integral part of the Temple and Jewish history, was really magnificent,” the rabbi said. “I was mesmerized by this simple cow.”

A very few candidates for the red heifer have been found. Most have been disqualified due to blemishes or pregnancies. In an effort to reinstate the mitzvah (Torah commandment) of purifying with the red heifer’s ashes, the Temple Institute in Jerusalem last year imported embryos of red angus, a distinctly red breed of cow, and implanted them in Israeli cows at a farm in the Negev. Though several male heifers were born, no reports of pure red heifers have been forthcoming.

Though it is unlikely the Baja bovine will become part of the Jewish Third Temple service, the random encounter had deeply spiritual meaning for Rabbi Hershcovich.

“It’s part of who we are and represents an important part of our future. Seeing it shows that our hope can be realized,” Rabbi Hershcovich said. “We always wonder if something we read in the news is the thing that will bring Moshiach. Seeing this red heifer in front of my eyes shows that it can indeed happen at any moment, in any location.”