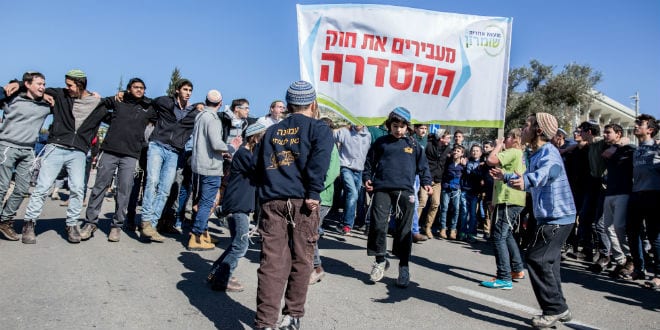 On Tuesday, around 5 PM, the Knesset plenum will begin debating the Regulation Act bill submitted by the Knesset Committee, according to an official Knesset announcement Tuesday morning.

The proposed law will put an end to close to 50 years during which left-wing NGOs would haul to the Supreme Court Arab claimants on lands within existing Jewish communities in Judea and Samaria, to be followed by the court ruling for the demolition of homes that in many cases had stood there for decades. Now those claimants would be compelled to choose between getting 125 percent of the market value of their property, or comparable land elsewhere.

The regulation act which would have been met by outraged condemnation of the Obama Administration is expected to be ignored, if not applauded by the new tenant at the White House.

On Monday, February 6, 2017, from 11 AM until 9:30 PM, the opposition will get one last chance to present its reservations, at which point the Knesset committee’s chairman, MK Yoav Kisch (Likud) and government representatives will offer their responses to all those reservations.

The actual vote is scheduled for Monday, not earlier than 10:30 PM. The opposition will have to choose its 100 most crucial reservations to be included in the voting.

Currently, according to a Knesset announcement, the coalition and opposition heads are negotiating over the prevention of activating article 98 in the Knesset rules, which enables the coalition to vote down an opposition filibuster. Unlike the speak-forever US Senate filibuster, the Knesset version is done with submitting thousands of reservations and amendments to an unwanted bill. The law permits the majority coalition to also apply the “accordion method,” which groups together multiple similar amendments into a single yes/no vote.

In the case of the Regulation Act, the opposition demanded 38 consecutive days for the debate, which the Knesset legal counsel, attorney Eyal Yinon, found excessive. So Zionist Camp whip MK Merav Michali said the opposition would settle for seven days, following which they received close to three.