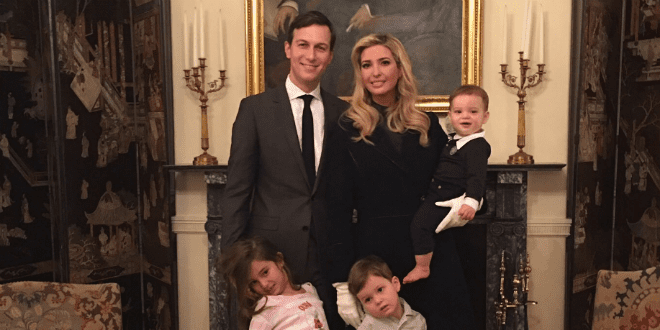 All of the D.C. dinner guests were sighted and photographed entering the Kushner home on Friday night by the Daily Mail, which published the photos on Saturday. Jared Kushner is visible greeting his guests at the door.

The photographers also caught the massive preparation efforts which took place on Friday afternoon before Shabbat and included makeup artists and hairdressers, deliveries of food, cutlery, and flowers, and a visit from Rabbi Levi Shemtov.

Secret service agents were seen inspecting all deliveries – and delivery men – before they were  allowed into the First Daughter’s house.

Jared Kushner and Ivanka Trump, who converted before marrying Kushner in 2009, are Orthodox Jews and observe Shabbat weekly. “From Friday to Saturday we don’t do anything but hang out with one another,” she has been quoted as saying.

Their home in Washington was chosen partly for its proximity to the synagogue they attend, a small Chabad congregation which also includes several other prominent political figures. The synagogue is located only a few blocks away from their home in northwest D.C.

It was unclear whether the couple’s guests participated in the usual Friday night Shabbat rituals, which include singing Hebrew songs and blessing a cup of wine and two loaves of bread (challah) with Hebrew benedictions.

The Trump-Kushner family is open about their commitment to the Jewish faith. During the recent festival of Hanukkah, Ivanka used social media to post a photo of the couple, with their three young children, lighting the menorah candles.