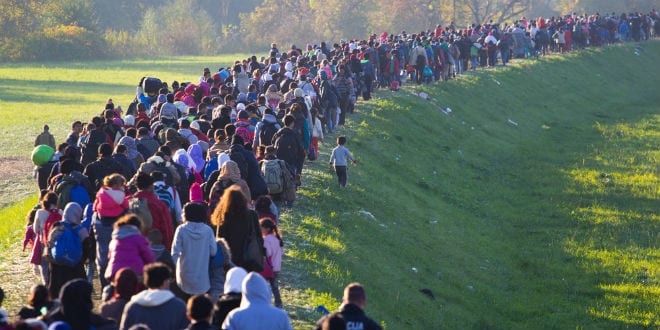 The order suspended the entry of refugees into the United States for 120 days and directs officials to determine additional vetting procedures.

The order bars entry to travelers from seven Muslim-majority countries linked to terrorism for 90 days: Iraq, Syria, Iran, Sudan, Libya, Somalia and Yemen. This includes travelers with immigrant and tourist visas. Green card holders from those countries will also be excluded from entering, and only those holding diplomatic visas will be permitted into the US. The executive order immediately suspended issuance of new visas and other immigration benefits from these countries.

The ban also put an indefinite moratorium on refugees from Syria.

The total number of refugees admitted into the United States in 2017 would also be limited to 50,000, reduced from the current level of 110,000.

Trump’s order will also cancel the Visa Interview Waiver Program, allowing repeat travelers to the United States to be able to forgo an personal interview to renew their visa. These travelers will now have to have in-person interviews as part of a stricter vetting process.

These time-limits went into effect immediately and caught many travelers by surprise, forcing them to return to their countries of origin.

Titled “Protection Of The Nation From Foreign Terrorist Entry Into The United States”, the executive order made good on a campaign promise Trump reiterated in his inaugural address: to protect US citizens from radical Islamic terrorism. The text cites the 9-11 attacks, and State Department policy that allowed the terrorists to enter the country.

“I’m establishing new vetting measures to keep radical Islamic terrorists out of the United States of America. Don’t want them here,” Trump said to the press on Friday at the Pentagon. ”We only want to admit those into our country who will support our country and love deeply our people.”

The order also gave the Department of Homeland Security leeway to prioritize refugee claims made by people “on the basis of religious based persecution” if the person applying for refugee status is “a minority religion in the individual’s country of nationality.”

This effectively makes it easier for Christians in majority Muslim countries to enter the United States than it would for Muslims from those countries.

“We are going to help them,” Trump said in a pre-recorded interview with the Christian Broadcast Network. “They’ve been horribly treated. Do you know if you were a Christian in Syria it was impossible, at least very tough, to get into the United States? If you were a Muslim you could come in, but if you were a Christian, it was almost impossible and the reason that was so unfair, everybody was persecuted in all fairness, but they were chopping off the heads of everybody but more so the Christians. And I thought it was very, very unfair.”