Putin and Trump to Speak on Saturday

Home » Putin and Trump to Speak on Saturday 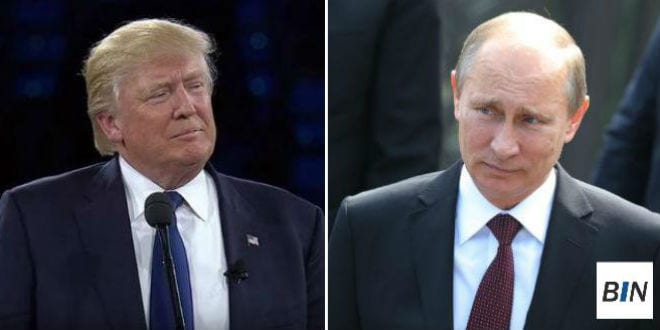 The Kremlin announced on Friday that Russian President Vladmir Putin will speak with US President Donald Trump by telephone on Saturday night for the first time since he was inaugurated. The two spoke in November after Trump’s election victory.

Relations between the two countries deteriorated during the previous administration after Russia annexed Ukraine’s Crimea region in 2014, leading to American sanctions against Russia. The situation reached its peak in the final weeks of Obama’s term in office. In October, Vice President Joe Biden threatened Russia with cyber war on a televised interview. The threat came after White House accusations that Russia had interfered with US elections by hacking more than 100 Democratic Party officials and groups. Russia has repeatedly denied any involvement in the hacking that led to embarrassing revelations about Clinton’s campaign. The situation came to a head in late December when, in the last stage of his presidency, President Obama accused 35 Russian diplomats of spying and expelled them from the US.

President Trump has vowed to improve relations with Russia, suggesting earlier this month he would lift the sanctions against Russia. His nomination of Rex Tillerson for Secretary of State is a step in that direction.  As CEO for ExxonMobil, Tillerson worked closely with the Russian government on several large projects.

The sentiment seems to be mutual. In his New Year’s address to his nation, Putin congratulated Trump.

“Major global and regional challenges that our countries have confronted in recent years clearly confirm that Russia-US relations are an important factor in ensuring stability and security in the modern world,” Putin said.

“Overcoming the most heavy damage inflicted on the U.S.-Russian relations by the administration of Barack Obama will take time and serious effort,” Lavrov said. “I know that Mr. Trump is considered a master of deal-making, but President Putin also knows how to make deals, and always in Russia’s interests.”

Trump will meet with British Prime Minister Theresa May on Friday, in his first face-to-face meeting with a foreign head of state since being inaugurated.