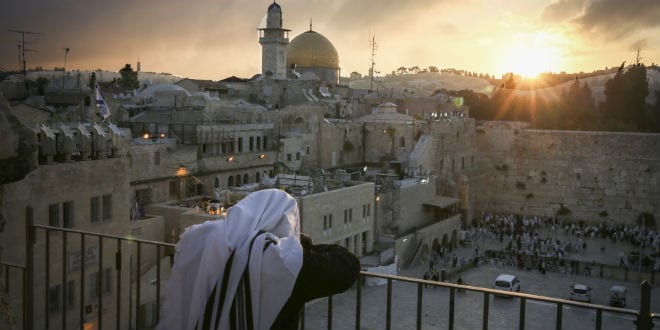 In the latest twist on a story which has been changing daily almost since the moment Donald Trump took office, the Palestinian Authority (PA) reported on Wednesday that the Trump administration has given it reassurance the US embassy would not be moved from Tel Aviv to Jerusalem in the near future. This contradicts several previous reports from the White House, including statements issued days earlier.

According to the PA’s communication with the White House, the embassy move is not on its agenda currently, an unnamed Palestinian official told the London-based Arabic-language newspaper Asharq Al-Awsat, leaving the PA leadership, which had vociferously condemned the measure and threatened violence if it were implemented, “relieved”. However, other Palestinian sources denied the report.

The source said that Trump officials had told Palestinian leaders it would delay plans to move the embassy so as not to damage embryo efforts to kickstart peace talks between Israel and the PA.

Palestinian Liberation Organization (PLO) Executive Committee member Ahmad Majdalani was also quoted by the paper confirming that Trump was backtracking on his campaign promise, which the president had repeated as recently as last Tuesday.

“You know that I am not a person who breaks promises,” Trump told supporters when asked about his plans to move the embassy.

That momentum had seemed to gather steam after Trump was inaugurated on Friday. On Sunday, Trump’s second full day in office, Press Secretary Sean Spicer told reporters that initial discussions for the move were already underway, albeit at the “very beginning stages.”

The administration’s desire to swiftly make the shift, mandated by Congress’s 1995 Jerusalem Embassy Act but deferred at six-month intervals by every president since then, seemed evident in Israel’s capital. Jerusalem mayor Nir Barkat told press on Monday that his office was in contact with the administration over the move and declared that Trump officials were “serious about their intention.”

Reports also emerged that the administration had already sent architects to Jerusalem in order to scout locations and begin plans for the new embassy building.

However, by Tuesday, language from the White House had shifted from a seeming guarantee that plans were underway to a more cautious footing, with Spicer saying that “no decision” had yet been made about the embassy move, and on Wednesday, the Palestinian report indicated that no immediate or concrete plans to make the move are in place.

While several senior Palestinian officials denied the Al-Awsat report on Wednesday, they said that Trump’s new rhetoric has led them to believe that he is “reviewing his election promise” to move the embassy.

“Both Trump not mentioning the embassy in his inauguration speech, as [Prime Minister Benjamin] Netanyahu had expected, and the White House’s press secretary statements over the past couple of days indicate that the American president is reconsidering his position on the embassy,” said Abu Yousif, a member of the PLO Executive Committee.