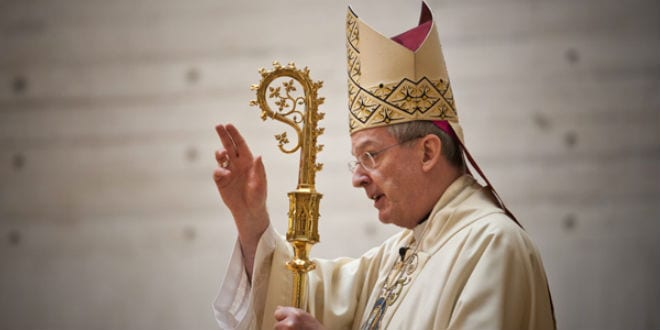 Citing Leviticus 25:10, “You will declare this fiftieth year to be sacred and proclaim the liberation of all the country’s inhabitants,” a group of bishops from eight nations, at the conclusion of a recent visit to the Holy Land, decried the situation in the areas Israel liberated after the 1967 Six Day War. Pushing an entirely original interpretation of the Torah commandment of the Jubilee, which is strictly relevant to Jews, the bishops declared that “during this fiftieth year of occupation we must pray for the liberty of everyone in the Holy Land and practically support all those working to build a just peace.”

“We all have a responsibility to oppose the construction of settlements,” the bishops declared. “This de facto annexation of land not only undermines the rights of Palestinians in areas such as Hebron and East Jerusalem but, as the UN recently recognized, also imperils the chance of peace.

“We all have a responsibility to provide assistance for the people of Gaza, who continue to live amid a man-made humanitarian catastrophe,” the bishops wrote, bypassing a more committed definition of who the man in “man-made” and what exactly he made (Qassam rockets to be launched at Israeli civilians).

“[The Gazans] have now spent a decade under blockade, compounded by a political impasse caused by ill-will on all sides,” the bishops wrote.

The Bishop of Clifton and Chair of the Holy Land Coordination, Declan Lang, said the group had been able to “spend time listening to the stories of those who have lived under the occupation; he recalled, in particular, the students of Bethlehem University, whom he says, have never known any other reality.”

Declan Lang probably missed the Dec. 19, 2016 report in the National Catholic Reported (NCR), that revealed: “In 1950, Bethlehem and the surrounding villages were 86 percent Christian. But by 2016, the Christian population dipped to just 12 percent, according Bethlehem mayor Vera Baboun. Across the West Bank, Christians now account for less than 2 percent of the population, though in the 1970s, Christians were 5 percent of the population. In Bethlehem, the traditional birthplace of Jesus, today there are just 11,000 Christians.”

Having stated the statistical facts, the NCR tries to shift the blame to the Israeli “occupation” (although Bethlehem is under PA rule) from Muslim intimidation – less brutal but packed with the same intolerance and hatred as the attacks on Christians from northern Iraq and Syria all the way down to Egypt.

Indeed, the only country in the Middle East where the Christian community is thriving and prospering is, naturally – Israel.