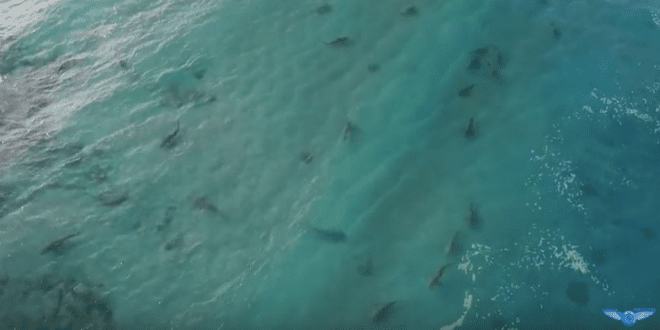 Dozens of sandbar and dusky sharks have appeared this week off the coast of the Israeli city of Hadera in a strange phenomenon that scientists are hard-pressed to explain – but the Bible may have an answer.

It is thought that the large group of sharks, called a frenzy, are attracted to the warm water output of the electric power plant in Hadera, but in a trend that experts do not fully understand, sharks are gathering in this spot in ever-increasing numbers each winter.

There many be another, simpler explanation: This could be the marine phenomenon described in Chapter 38 of Ezekiel that accompanies the war of Gog and Magog, ushering in Messiah.

Surely in that day there shall be a great shaking in the land of Yisrael; so that the fishes of the sea and the fowls of the heaven and the beasts of the field and all creeping things that creep upon the ground and all the men that are upon the face of the earth shall shake at My presence. Ezekiel 38:20

The Tikunei Zohar (Tinyanya Tikkun 43), an esoteric book attributed to Rabbi Shimon bar Yochai in the first century, explains that this increase of fish signifies a specific stage of the Messianic process, in which the  the Messiah from the House of Joseph and the Messiah of the house of David, two separate stages, join together.

The Messiah from the house of Joseph is a practical building up of the land that precedes a miraculous period, Messiah from the House of David, which includes the building of the Temple. The period ushered in by the appearance of fish is described as a period of hamtakat hadinim (sweetening of the judgements), symbolized by the fish’s ability to make seawater palatable.

Fish play a prominent role in End-of-Days prophecy. Based on a prophecy in Zechariah, it is believed that in the days of the Messiah, a river will flow from Jerusalem down in two directions: eastward towards the Dead Sea and westward towards the Mediterranean.

In Ezekiel, it is stated that these Messianic waters will cause the Dead Sea to become teeming with fish.

And it shall come to pass that every living creature wherewith it swarmeth whithersoever the rivers shall come shall live; and there shall be a very great multitude of fish.  Ezekiel 47:9

Last summer, Breaking Israel News reported on  the appearance of marine life in brackish water ponds on the shores of the Dead Sea, in visible fulfillment of that prophecy.

Scientists are on hand to study the sharks but still do not understand why they gather at Israel.

Adi Barash, PhD student and researcher in the School of Marine Sciences at the University of Haifa Leon Charney, explained the situation to NRG, a Hebrew language news service.

“The population of sharks worldwide has declined greatly, and this is especially true for most Mediterranean coastal sharks, which have disappeared altogether,” Barash said. “Such a phenomenon of warm water sharks gathering is unique, and there is no similar case of this happening anywhere in the world, but in recent years, we have seen this phenomenon repeating itself here every winter.”

Hadera is the site of Israel’s largest electric power plant, and expels warm water into the Mediterranean.

“We know they like being in the warm waters, but we don’t know exactly why,” Nature and Parks Authority marine ecologist Ruth Yahel told AFP news service.

“You can see they’re drawn to the warm water — they enter its stream and perform a Rondo-like dance, fly out with the stream, circle around and do it again,” she said.“They might do it because it’s fun, or pleasurable to be in the warm water.”

The Israeli Nature and Parks Authority (INPA) and the Israel Diving Authority issued warnings to bathers to avoid the area. The last reported shark attack on this part of the coast was in 1945 and the sharks are not considered aggressive unless provoked.